View source
This is an article about Kabo the Bomb, a character created by Megaphantaze on 04/7/2014.

"This time my plans will not be frozen from that cat"

Kabo's head is a bomb.  His usual attire his favorite body, which contains purple, fancy jacket. Inside it, there's a red tie and white shirt. Lower body is crab-like feet and a box, where can be attached legs. Under the body, he has robot hands and feet, so he is actually controlling the bodies. When not using the bodies, he is as small as such as Cream the Rabbit, Charmy Bee and Bokkun.  Kabo has various other bodies, which he uses in special occasions.

As said, Kabo has various bodies made to various occasions. Trombie Kabo has a tornado shaped body, which contains arm cannon and normal hand. This form can be used at road to chases, and the body gives Sonic's speed for Kabo to catch up the one who he is chasing.

Kabo has also flying for called Sky force Kabo, which is designed to air battles. It's neck is grey, sides are red and includes grey wings and inside the red sides, there are guns. The chest includes one big cannon, which shoots laser beams. Under all this, there are bombing systems, which can drop bombs down.

Kabo has also scuba form, which resembles merman. He has red jacket and sharp tops in hand, which can create shock balls. He has a motor in the tail, which is created to avveleration and quick dodges. He also has a golden necklace and blue gem in the middle of the golden piece.

Kabo is mad and crazy robot. He still has little piece of evil mind, although he is insane and "blows his mind" all the time. Strange enough, he still knows, how to use weapons and is weapon nerd.

Kabo took the factory for his own purposes and started to make own robots. The machine however shut itself down after making two robots: Kabo's two minions, Crusifix the Crusher and Fletku the Trashcan, which are both anti-villains. He made the factory as his own base and named it as "Kabo's demolition imperium". The imperium is now concentrating on creating explosives and other stuff to attacking purposes. Kabo has been also considering to make a whole company of his imperium idea and is aiming to crushing other weapon companies and let his own as a ruler of weapon making companies.

After Lumi the Cat got married with Marian, Kabo found a perfect place to make a new weapon factory.  Apparently, it will be on place, where's Lumi's legacy, the national park is. Lumi works as protector of the park, when Kabo tries to destroy it.

Another story line tells, that this nemesis has created a bomb, which could destroy a whole city. he planned to detonate the bomb at Robotropolis and He stole eight Pilot's made robot masters and made them to assist in the destruction mission.Kabo however failed to accomplish this and escaped from Robotropolis.

When in battle, Kabo may use other bodies. One of the bodies is designed for a Aerial battles. This body can drop bombs and missiles. Another body is tornado model, which Kabo uses on chases. He has many other comparable bodies for many purposes. One of the latest bodies is called as scuba kabo, which uses electricity. The electricity doesn't harm water though, since it's a special water immune-energy using electricity.

Although Kabo's head is bomb, his head is special. If the bomb explodes, it will respawn. Nobody knows, how Kabo does this, but it's said, that he uses Nitrokinesis, which allows recovering afterward after the explosion

Kabo's main weakness is ice, but his bodies has several weaknesses:

Kabo's serial number is the birthday of his creator.

Kabo's name is from the word Kaboom 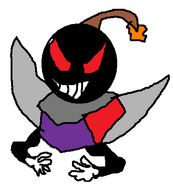 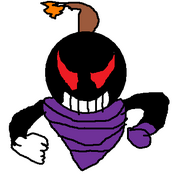 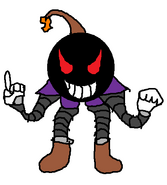 Kabo without his body 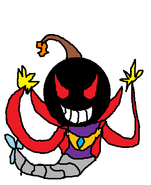 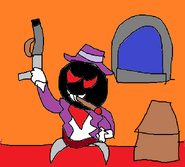