I'm faster than the speed of light! So, yeah, don't stand too close.

K.A.N.I., like most rabbits, has yellow fur and blonde hair. Her hair style has been changed many times, but it ended up as two spikes in the back. She also has a spikey side-bang. The hat she wears on the top of her head is the same one that her creator, NICOLE , wore during Mongoose’s Mina Mongoose’s concert in Sonic #222 . The only difference is that instead of a silver lustrous  buckle on the band, K.A.N.I. put a gem (the same one under Silver’s boot cuff) in its place. The rabbit has a white muzzle like Cream’s that has no fur on the side. K.A.N.I. has electric purple eyes and eyelashes unlike all other girls in the Sonic Universe. With her nanite abilities, NICOLE made lightning bolts by her eyes a bit darker than the color of her fur in the place of the eyelashes. K.A.N.I. also has unique ears. Instead of just a stripe, K.A.N.I. has jet black lightning designs on her ears. Her Moebian (anti) counterpart claimed that K.A.N.I. stenciled them on her ears

instead of using nanites (which is considered disgraceful) . This rabbit wears a simple, grey, short-sleeved hoodie with her name etched on the upper part. She also wears plain blue jeans. K.A.N.I. could have better clothing (what with her nanites), but none of her friends can afford nice clothes, so she fits in with them. She has short, red, fingerless gloves that have bumps on the knuckles to make punches stronger. Her boots are mostly covered by her jeans, but you can see the red with the yellow lightning bolt down the middle and the metal bar that goes across to increase kicking power. K.A.N.I.’s chaos suit isn’t from Chaos Zone Prime like Blade’s is. This rabbit’s comes from natural chaos abilities. It is a halter top with a silver strap that leads to a capsule of chaos energy in the center. Most of the shirt is red. There is also a golden lightning bolt that goes down the right. The shirt stops at her lower chest. After that is a plain red skirt. Her boots don’t change, and her gloves come up to her arm. Before she cut off her ponytail (when her whole team was roboticized) with Blade’s knife, she had a red ponytail holder.

K.A.N.I. is super energetic and excited. She is always positive, like positive energy. She only gets negative when Shock shows a desperate interest in somebody else. K.A.N.I. is loved by everyone on her good-mood days. She is funny, and can make anyone smile in a bad situation. However, her positive energy can be deceiving, especially in a fight. She will pretend to act care-free, and stays that way if her opponent isn’t challenging. If her opponent is a threat though, she goes from happy little K.A.N.I. and strikes it up to “A game time”, refusing to stop until she wins. If she loses, though, she will start acting immature and whiny.

K.A.N.I. was created by NICOLE, whom she refers to as “mother”. NICOLE created her by the time that Manik and Sonia , the royal twins of the future, were in college. She put a lot of programming into her new creation, her new “daughter”, but had to leave to help the Future Freedom Fighters when Portal was being destroyed. Sadly, Portal was destroyed and K.A.N.I. never saw her mother again. She always thought that NICOLE “abandoned” her, leaving her as a one-year old. However, both she and NICOLE knew that K.A.N.I. could take care of herself since she was practically a robot. So, K.A.N.I. grew up in a tiny, underground base, never getting to see the outside world. One day, out of boredom, K.A.N.I. went into  small chatroom on her computer with nobody there but her and some boy. He easily earned her trust since K.A.N.I. was never taught about social safety. She told him everything: where she lived, how old she was, what she liked and hated. The other user related to her very well and they started meeting once or twice a week until it was every evening. After about two years of this, when K.A.N.I. was 13, the mystery chatroom person busted into the lab on extreme gear. His name was Shock, and he was a falcon. He took off with her without even saying anything. They became best friends and traveled different zones and times with their cyan time stone. Later the Kinetix found them as they were searching for people with kinetic abilities as well. The only Mobians on the team so far were a white hedgehog with weird spines, a beautiful purple cat, and a small, spunky, brown fox. They went searching for more until the cat and hedgehog left the new, six friends behind going on various missions. Later the six found a small group of about 10 teenagers with kinetic abilities (at a low learning level) who needed help learning their powers and hiding from other Mobians who tried to kill them. They formed an academy where the six taught the kinetic abilities to many teenagers in need. Later, the hedgehog and cat came back and started teaching psychokinesis and pyrokinesis.

K.A.N.I. is an electrokinetic, which means she has lightning powers. These powers make her super fast. It also helps her pack a punch, which makes her strong too. She can easily dodge things and can generate lightning from her feet so she can fly. Her lightning’s color can differ. Normally it is purple, like her eyes. When she is extremely emotional, happy or angry, it is blue. When she goes super, it turns yellow.

K.A.N.I. also has natural Chaos Control. It turns out that NICOLE had tried to make a second ultimate life-form in case former King Shadow would try to destroy everything in his path... again. However, she was too late. K.A.N.I. was one year old when Shadow tried to destroy Portal again, so she couldn’t do anything. She has been calculated as one of the two people who could match Shadow - her and Lara-Su . Now that I think about it, it must be embarrassing to be able to get beaten up by two 16 year old girls. At the age of forty.

K.A.N.I. is strong. Stronger than most girls on Mobius. Aqua and Blade have a seriously hard time against her. She can dodge, punch, kick, and figure out almost any weakness in a matter of seconds. She also has control over nanites, and can make any physical object. Lastly, K.A.N.I. is a genius. She is just as smart as her mother but hey, they’re both robots. Anything is possible when you’re a robot.

Where do I begin? Okay. All of K.A.N.I.’s skills come with weaknesses. She is a toughie, but if she’s up against more than two people, she is done for. Her mind is too detailed (as a robot) and can’t think about more than one thing at a time. Sure, K.A.N.I. can figure out weaknesses in seconds, but she can’t figure out one of her own - she is seriously, WAY too arrogant. She thinks she can do everything but she can’t. That is also one of the biggest reasons that even one good opponent can strike. Lowering K.A.N.I.’s confidence just by insulting her can catch her off-guard. Being not only a robot, but an electrokinetic as well, she can't be too exposed to water. Lastly, K.A.N.I. may be smart, but she is nowhere NEAR strategic. That’s why she isn’t a good leader. A robot can think of anything but a game plan.

“The fresh smell of winning in the morning...!”

“Aaand she passes the morons who think can beat her!”

“Tolja- FASTER THAN THE SPEED OF LIGHT!”

“Excuse me? What IDIOT judges this crud?”

“Is THAT your extreme gear? May I say- PATHETIC?!”

“Might wanna stay out of this one sweetie. I wouldn’t want to do a crime such as breaking your NAIL! …Do we even have nails...?”

“Learned THAT one in kindergarten, hon.”

“I love it when I catch you looking at me.”

“It’s not my fault I’m falling in love with you... YOU’RE the one that tripped me!”

“It isn’t that easy to download data. If I rush it, it could SERIOUSLY screw up the nanites!”

“What doesn’t kill me only makes me stronger. So if you’re planning to hurt me make sure you kill me or I’ll be coming back for you.”

“Every time you open your mouth, some idiot starts talking.” 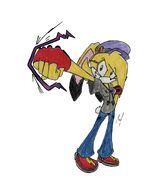 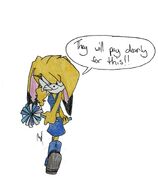 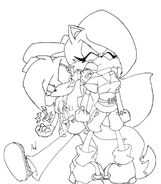 K.A.N.I. in her SFF uniform
Add a photo to this gallery

Retrieved from "https://sonicfanon.fandom.com/wiki/K.A.N.I._the_Nanite_Rabbit?oldid=1852938"
Community content is available under CC-BY-SA unless otherwise noted.