I don't get it. Why's everyone pissed at me? I was made for one purpose and I couldn't exactly do it with him in the way. 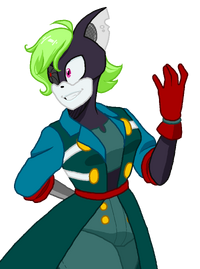 Juliet Robotnik is the leader of the Legion of Hell and one of the main antagonists of Sonic: Future Held. She is hotheaded and immature, and her team, despite it menacing name, is often regarded as a joke. She and Maria were created by Dr. Eggman. While her sister was made as a capsule to hold Maria's soul, Juliet was created to be Eggman's successor.

Her fur is a grayish-black, except for her bangs, which are neon green. Her bangs sweep to the left side of her face, almost covering her eye. Her irises are a magenta color, and under her synthetic eyes her scleras are completely black, and her irises are bright red. After the explosion, she is seen missing one synthetic eye, and she only has one ear, albeit a badly-damaged one. Her right arm is also a smaller mechanical skeleton, rather than a full synthetic arm like she originally had.

When she was first created, she wore what was esentially a smaller version of Eggman's uniform, although she wore the jacket open, with a white t-shirt underneath.

Juliet wears a long teal coat, with a green crop top and matching pants. She has dark red gloves and a belt.

She is hotheaded and immature, and pretty socially awkward. She thinks herself sassy and smart, when, in reality, she's kind of a moron. She's also full of herself, and she shows it, causing even her allies to be exasperated. She tends to act without thinking, which more often than not gets her seriously injured, so she usually spends time in her room repairing herself.

While she's bad with people, she's certainly good at hurting them. She's a skilled gunman, trained in approximately three hundred different guns. Her favorite is an AMT Automag V, which she keeps on her waist at all times, hidden by her coat.

Juliet is one of many androids created in a project by Dr. Eggman. She was the last to be created, and was designated to be his successor in the event of his death.

Juliet has not appeared in any roleplays at the current moment.

While she has not appeared in any published fanfiction, she is the main antagonist of a work-in-progress fic titled Sonic: Future Held.

She sometimes referred to him as 'father', but more often than not, called him 'dad dude'. He was the one who created her, with the purpose of being her successor.

Although they're technically not related, Juliet always calls her 'sis', and and says that they're twins, because Maria's body was created by Dr. Eggman.

While Juliet considers Maria her ally, the sentiment is not mutual.

Juliet is blind. She wears synthetic eyes that give her sight, and when she was in her development stage, she was supposed to be able to use powerful echolocation once she removed her synthetic eyes, but unfortunately, she never got the echolocation.

She is reckless and violent, often rushing into things without thinking and getting her injured. She often has breakdowns because of this, both physically and mentally.

Retrieved from "https://sonicfanon.fandom.com/wiki/Juliet_the_Bat?oldid=1864246"
Community content is available under CC-BY-SA unless otherwise noted.