The author of Juliet, considers this page to be unfinished. As such, some sections may change.

Juliet was only a child living a happy and fun life, then one day Wizeman came to her home. He took her parents and she went on a journey to save them, and when she faced Wizeman, with the power of her black emerald, she beaten him and got her folks back, but she also got scared of her emeralds power. Years later she meet her future team and helped them,then soon came to her home and given the task to rid the shadow monster, and with the help of her friends it was kill, but almost lost control of herself from the emerald. After killing Black Mind, she overcome her fears and soon meet a Nightmerian who loved her and they both had a son together.

As a kid she was always happy, 'till Wizeman took her family and held them as his prisoners, but she save them with the evil power inside the black emerald, which in turn scared her to use its power .She would distant herself away from others for the fear of hurting them. That was the case till she joined the Chaos Patrol and rid the evil of the black emerald, she as happy as she was as a kid again.

During one of her daily flights, she ran into Zant, and became friends despite him being a Nightmerian. Then soon after a long time they both married and had a son, and lived a good life together. 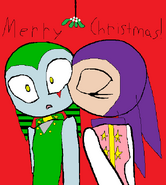 Jester Juliet
Add a photo to this gallery

Juliet is a female Nightopian with purple hair which goes down to her back and she has dark blue eyes. Her main clothes is a pink jester dress with yellow stars and a white dot, yellow trimming, white sleeves with purple and yellow, purple collar, purple pants, and purple shoes. As Jester Juliet, her outfit is a black mask, a black flowing top, black pants, and black boots with white fluffs.

Retrieved from "https://sonicfanon.fandom.com/wiki/Juliet?oldid=1853144"
Community content is available under CC-BY-SA unless otherwise noted.