Julie-Su is a character that appears in the Sonic the Hedgehog comic series and its spin-offs published by Archie Comics. She is a Mobian Echidna, as well as the girlfriend and distant relative of Knuckles the Echidna. Born the daughter of Luger and Mari-Su, Julie-Su was brought up among the Dark Legion. After her parents were murdered by her half-sister Lien-Da, she was placed in the foster care of Simon and Floren-Ca before she was taken away from them as well. Serving as a support troop in the Dark Legion for years, she eventually left it to join Knuckles and his group, the Chaotix. Since then she has fought along Knuckles' side and continues to function as a key member of the Chaotix.

Julie-Su is pink with violet eyes and purple-tipped bangs. As a former Dark Legionnaire, she bears cybernetic details; her left foremost dreadlock is fully robotic, and the others sport various metallic plates, rings and wires. Her gloves are mitt-like with the first finger on each separated. She wears a black tank top with teal padding on the left side, a yellow-orange belt and large, mechanical-looking teal boots. Her left arm is fully covered in metal rings; her right arm is often depicted as having similar rings on the forearm or lacking them entirely. Gradually, many of the smaller details of her initial design (including a thumb ring, a metal piece encircling her right leg, and teal bands around the cuffs of her gloves) were, for the most part, dropped. Her boots generally lost some detail and slimmed down greatly from their initial design. Depending on the artist, the length of her dreadlocks varies between shoulder- to knee-length. Her top and boots tend to shift between various blue and green shades depending on the colourist. Her eyes are often mistakenly coloured blue and the darker tips of her bangs are often omitted. Sometimes her gloves are mistakenly drawn with full fingers.

She has briefly appeared wearing the typical Dark Legion black hooded robe. On one occasion she sported a wide-brimmed sunhat embellished with roses and carried a brown purse. She’s been shown to sleep in a long white nightshirt. On two occasions she’s been depicted in more formal attire; a short black dress (with jacket) and a long, tan Echidna tribal gown with triangular grey and green trim (the latter designed by artist Tracy Yardley). As a child, she was depicted as wearing a padded shirt with layered sleeves; this, as well as her general character design, were both created by artist Patrick Spaziante.

She is very similar to Knuckles in personality, acting tough but in reality, is quite caring. She is an advocate of "girl power," serving as the only female member of the Chaotix. She is willing to go into any danger, particularly when it involves saving Knuckles. Julie-Su,'Su or JS as she is known to her friends, prefers to go into battle with her friends rather than wait on the sidelines. Technically speaking, she really likes to take it easy, too.

Julie-Su carries with her a double-barrel multipurpose proton gun and a taser. In tradition with her family history in the Dark Legion, some parts of her body have been replaced with cybernetic implants. These implants include her left arm, giving her greater physical strength in the ordinarily weaker limb. Julie-Su is also trained in various forms of martial arts like Knuckles.

She originally was supposed to have a sawed-off shotgun as a weapon, but the idea was rejected due to its' real-world illegality. Also Julie-Su has recently begun living in the Kingdom of Acorn and their laws prohibit her from using firearms, though this did not apply to her previously. 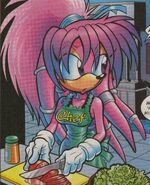 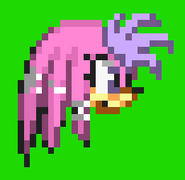 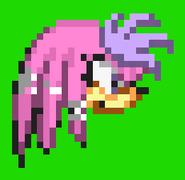 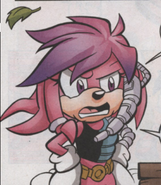 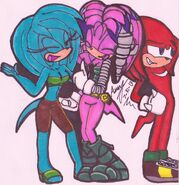 Add a photo to this gallery
Retrieved from "https://sonicfanon.fandom.com/wiki/Julie-Su_the_Echidna?oldid=1786787"
Community content is available under CC-BY-SA unless otherwise noted.