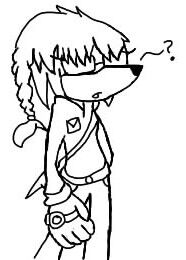 Julia usually wears a dark grey tank top that's often covered by a medium dark brown leather jacket and also wears grey pants held up by a black belt and light blue boots. She usually wears a gold watch on her right wrist, but sometimes also wears a silver one. Often times she wears glasses that match the colour of her watches and has her hair in a braid.

Julia occasionally wears a one-strap violet dress that has a skirt that goes below the knees along with dark purple glasses and low-heel purple boots. She typically wears gold and silver bracelets on both wrists when wearing this outfit, though she may choose not to. Julia also wears her hair down with this outfit.

Julia-Xe's personality off the set is exactly the same as it is on TV. She is extremely energetic and chatters away frequently, especially with contestants on TV shows. Julia expresses much interest in acting, often being seen rehearsing some play in private. Julia can also be described as a pest and may as well be a recipe for disaster on any TV competition, ranging from cooking to athletics to wrestling.

She also has a reputation for being annoying to other hosts as well as judges, occasionally resulting in her being briefly fired- only to be rehired because of fans liking her extreme antics.

Retrieved from "https://sonicfanon.fandom.com/wiki/Julia-Xe_Dax_Finitevus_the_Echidna?oldid=1800644"
Community content is available under CC-BY-SA unless otherwise noted.