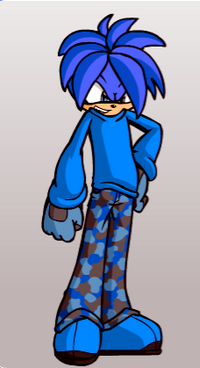 Anyone who insults him
Dislikes
Seeing his friends hurt or injured

Anyone who claims there stronger than Seiko Vegetables

Joshua is a male blue light blue hedgehog. He has blue hair covering haft of his eyes, He has blue eyes. And taller than the average hedgehog, He wears a blue jacket with black strips on it, He also wears blue army pants.

Joshua is a very lazy and lead back guy, He plays video games and eats junk food all day. He does not like to do daily work, But if his life his in or his friend's life is in real danger, He will get very serious and not hold anything back to anyone or anything that well tries to harm him, He almost takes every fight he gets into seriously.

Joshua grew up in a foster home along with his brother Seiko were born with some sort of rare medical because of this condition. He and his brother were outcasted and bullied by other kids because of that. When Joshua went to school to school. He meant a young girl name, Eliza they were gold friends, And cared about her dearly When they were in middle school. Eliza was suffering from "Depression". She one day killed herself. Joshua was enraged but he knew what was haunting her wasn't depression it was something much worse. He believed that She was being mind controlled by something or someone and he was going to get to the bottom of this

To find Eliza's killer. He began to take self-defense classes at the hiro clan. While there he meant a really powerful man name Taisho. He asked To be his student after asking he said so many times he said yes. He eventually mastered a lot of different fire fighting styles. To this day he still trains with Taisho to find Eliza's Killer.

Seiko: Seiko is his brother and closest friend, They get along very well most of the time, While they do have their differences and at times they can be considered rivals, But he hasn't meant any he can call a friend other than him.

Taisho: Taisho is Joshua's mentor and master, While they aren't exactly friends. But they do get along. Joshua even considers him a father figure.

Sonic: Joshua greatly respects Sonic and vice-versa. It is noted that they are friends since Joshua and Sonic they have eaten chilly dogs together and they get along very well.

Shadow: While he does find Shadow a bit rude and crazy, They do respect each other.

Tails: Joshua and Tails like to help each other out sometimes, but most of the time Joshua is annoyed by tails' smart and nerd like personality

Knuckles: While Joshua and Knuckles don' t interact with each other that much, They do respect each other's power and they once fought somewhere in the USA.

Amy: Joshua is often annoyed by Amy's fan girl personality and would much rather stay away from her.

Blaze: Blaze often criticizes Joshua for his lazy personality, Because of this they often argue each other and have brief fights.

Omega: While Joshua and Omega don't interact with each other that much, He often insults him and calls him names like a metal piece of Junk.

Rouge: Rouge and Joshua despise each other. Mainly because Rouge Insulted him about his dead girlfriend,and his lazy personality.

Eggman: Eggman is One of Joshua's enemies. He often likes to ruin his plans along with Sonic and friends.

Michael: Michael Joshua's arch nemesis and he his current suspect on who killed his girlfriend