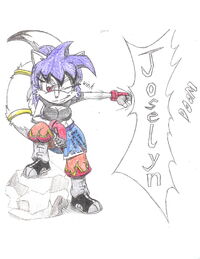 Her years of training turned her from a frail, quiet, reclusive princess into a tough, outgoing, playful tomboy. However, her typically brash behavior is offset by the fact that she is also compassionate, caring deeply for her friends even if she won't admit it. She enjoys working out, whether it be lifting heavy objects, cardio, or fighting somebody or something; her curiosity usually peaks during battle against relatively strong opponent. She likes feeling powerful. She also likes to shop and eat tons of food, she'll even sit next to Duke to steal some food off his plate. Speaking of the red hedgehog, Joselyn loves to tease him from time to time showing subtle signs of affection quickly followed by showings of blunt force which she calls "love taps". She's not a fan of quiet places or sitting still for too long, she has too much energy for that. If she feels a long winded monologue coming her way she will cut it short; she tend to get sassy when she's impatient and will start throwing out sarcastic remarks when irritated. Joselyn absolutely despises feeling weak, she starts to lose her cool if she feels inferior to someone.

Joselyn was born into a wealthy family and was a constant target of kidnapping unlike her younger brother. After her 5th kidnapping, don't ask, she requested that her attendant train her in self defense. She found enjoyment in her training, thus she continued it for 6 years; at the age of 15, she became a master in 7 different styles of fighting. Wanting to get stronger and have some fun in her life, beyond the walls of her lavish mansion, Joselyn decides to travel around Mobius. She spends most of her days training when she's not shopping for new gear, helping people in need, or fighting other warriors or even giant monsters just for the fun of it. She accomplishes the more absurd tasks thanks, in part, to her superhuman body; and with her inherent ability to perceive and manipulate chaos energy, she has the power to manipulate the elements as well as time and space. Joselyn crashes into our heroes, more precisely Duke, after she barely escapes an exploding fortress.

Through years of rigorous training, Joselyn has become a powerhouse capable of moving faster than lightning, lifting thousands of tons worth of weight, and surviving critical/fatal attacks. Joselyn's strength is great, but she lacks sufficient control over it; so, she has to wear weighted clothing to restrain herself from going overboard with her attacks. Casually walking around with 2,400 tons on her body; needless to say that when this gear comes off her strength and speed skyrockets.

Joselyn is a practitioner of physical combat, she has learned various fighting styles such as boxing, kung fu, judo, tae kwon do, and capoeira. She is also well versed in various weaponry, but favors bo staffs, swords, and firearms. She also briefly studied ninjitsu, and learned the art of deception and espionage.

Though she has power over all the elements, she doesn't have any special defenses against them; if she gets hit with fire, she will burn. Any overexertion of activities will eventually exhaust her. Ancestral Evocation takes time and concentration, leaving her open to attacks. Super form may be godlike in power, but it is temporary. Other chaos energy users who rival or surpass her in skill and power can overpower and beat her. More capable fighters can out-match her. She is very brash and impatient, this will cause her to make many mistakes, some of which could be fatal. Certain elements are weak against others, water>fire>air etc.

Retrieved from "https://sonicfanon.fandom.com/wiki/Joselyn_the_Fox?oldid=1865929"
Community content is available under CC-BY-SA unless otherwise noted.