Storm's not a rat! He a great warrior. Yup, yup! He awesome! He gonna teach me how to be a warrior.

— Talking back to Rough, A Grand Return

Jordan the Buizel is a character set to appear in The Legend of Fox the Brave: Broken Worlds. He is a young, friendly Buizel native to the Mystic Ruins Forest, a former member of the Mystic Ruins Floatzel Pack, and the new friend and de facto apprentice of Storm the Buizel. It's possible that he is a five-year-old, given how he speaks. 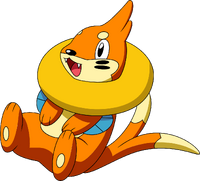 Jordan is a small Buizel standing at about a head smaller than Storm, barely reaching the bottom of the warrior's flotation sac. He also has a tuft of fur between his eyebrow-spots on his forehead that is scruffy and bushy, distinguishing him from Storm.

Because of his young age, Jordan is rather childish and naive, and appears to have a limited vocabulary. He is eager and friendly, and also appears to be a fan of the warriors as he is said to enjoy stories of battles, and resists his parents' attempts to keep him from watching the training battles that occur in the forest. Jordan looks up to Storm has a great warrior, and does appear to be smart enough to understand things like villainy, as when he talks to Max, he gets angry over the fact Dr. Starline forced Max to flee his home, and later captured him.

At an unknown point before A Grand Return, Jordan was born in the Mystic Ruins Floatzel Pack, as the son of its leader Current and his mate Coral. Because the pack didn't interact with others of the forest, Jordan didn't meet many Pokemon outside it until he left to accompany Storm and Boomer. After leaving his pack, Jordan remained with Storm until he was captured by Rough and Tumble for Eggman's experiments. But he was soon rescued when the warriors attacked the lab, destroyed it, rescued the prisoners, and drove Eggman and Starline into hiding.

Jordan's Ability is Swift Swim, which increases his speed in rain. He also has the ability to breathe under water, which all Water-Types can do.

Jordan can spin his tails very fast to swim underwater, and inflate his flotation sac to stop himself, a skill all Buizel and Floatzel can use.

Jordan is named after Christian singer Jordan Feliz, who made the song The River, among others.

Retrieved from "https://sonicfanon.fandom.com/wiki/Jordan_the_Buizel?oldid=1851823"
Community content is available under CC-BY-SA unless otherwise noted.