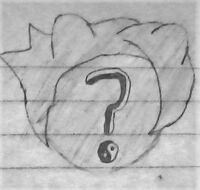 Joho's appearance is currently unknown. They prefer to talk to Clock-Watch through a chat client, instead of talking face-to-face. This is due to their preference to stay anonymous.

Joho's defining trait is their craving for information. Not for exploitation or money, you see. They just want to know everything there is to know, no matter what the cost. They have been shown to be ruthless, figuring that when it comes to information, the ends justify the means. Besides information, Joho has an attitude of general apathy towards everything. They also strive to stay anonymous, due to a fear of being hunted down by people looking for information. Joho would never sell info to anybody, only trade.

Most of their history is unknown. They contacted Clock-Watch shortly after his return from Sakoku, due to his return to law. Their reason was due to an interest in his magatama. After all, any self-respecting info maniac would want a mystic rock that could tell when people were lying! Obviously, Clock refused to hand over the magatama, and instead struck up a deal with Joho: He would solve more cases and research things for them in exchange for occasional help during cases. Despite asking several times, Joho has still not revealed their identity to him.

Joho is very skilled in the art of hacking. They have been shown capable of hacking even the most protected servers, such as the very one that G.U.N. uses for classified information. Their own firewalls are very strong, as well. As such, Clock-Watch has not been able to learn anything about them.

Retrieved from "https://sonicfanon.fandom.com/wiki/Joho_The_Mobian?oldid=1826279"
Community content is available under CC-BY-SA unless otherwise noted.