James Travis Walker, commonly known as Jim the Dog, is a fifteen year old Mobian who practices martial arts and has the ability to create and manipulate crystals. He is a high school freshman and holds no known job. 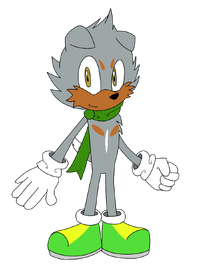 Jim was adopted from a YouTube user in June of 2010, making him one of my oldest Sonic fan characters. He was originally a very poorly done recolor of Tails, though his basic appearance has changed little. At one point, I decided to make him a dog-wallaby hybrid, but Jim went back to being a normal dog by 2012. Jim as also intially Australian-American, but this too was changed. His original personality consisted of being "fun-loving" and "random". This changed for the better once his page was restored.

Jim has had three backstories during his time on the wiki. In Jim's first backstory, Jim was playing outside, when Sonic and the Freedom Fighters noticed him. Sonic decided that Jim would be a useful asset to the team and asked if Jim would like to join. Jim agreed to Sonic's offer and joined the Freedom Fighters. Later, he rescued a Rottweiler named Tina from Coconuts. They fell in love eventually and in the future, got married. In his second backstory, Jim was a dog living on Angel Island who dreamed of becoming a sailor. However, he abandoned his dreams when he was offered to join the Chaotix. While Jim worked hard, Vector never paid him. Deep inside, Jim still wished to become a sailor one day. In December of 2017, Jim's backstory was reworked into what it is today.

Jim is a lightweight, teenaged Australian Shepherd/Rottweiler mix with grey fur and white and tan markings. His round eyes are hazel colored, round, and quite large. His muzzle has fluffy cheeks much like that of a fox, but the muzzle is colored tan as opposed to white, and his snout is longer than a fox's. From his Rottweiler mother, he inherited ear shape and general face shape. From his father, he inherited his general coloration and body type. Jim has two tufts of fur on the sides of his head, and a tuft of bangs that are swept upward.

Jim usually wears plain white gloves, green and yellow sneakers, and a forest green scarf. When practicing martial arts, however, he wears a white gi with a black belt, a hachimaki headband with "日本" (Japan) written on it and the rising sun in the center, and no shoes. Additionally, he wears a black and white tuxedo with dress shoes, a pink bow, and a red rose for formal events.

Jim was born in Priscilla, Downunda, to Donna Walker and Harland Walker. As a pup, he learned how to hunt, being taught by his father. His mother taught him martial arts for self-defense against attackers. Jim dreamed of being a sailor someday, having his own ship. But he abandoned this wish, after deciding to pursue a career as a martial arts professional. At age 10, Jim made in into the National Karate Tournament after hard work and effort. However, he didn't manage to get first place; he was ranked third. While Jim was pleased that he made it into the top three, he felt it wasn't enough; he wanted to get first place, one day.

However, things changed. An attack was set on his city when he turned 12, and his family fled the area. Jim thought that he and his parents should leave the continent altogether, but they disagreed. Nevertheless, Jim disobeyed his family and set out on a boat at night, into the open ocean. For months he was out at sea, looking for land. Finally, after 5 months, he found a shoreline. He quickly took his boat to shore. Shortly after, he met a fellow immigrant, a German accented Eurasian lynx named Lena. She explained that Jim had arrived on a continent called Northamer, and that they were near an area called the Great Forest. Jim asked for any villages nearby so that he could rest there. Lena nodded, and she led him to a village called Knothole.

Jim was soon told of an evil tyrant named Dr. Robotnik, who was destroying land and capturing innocent Mobians, only to have them turned into robots and serve under him. Jim presumed that this man had something to do with the attack on his hometown, and so he decided to stay in Knothole, to help against the battle.

At the age of 14 and a half, Jim was sucked into a portal.

As a child and preteen, Jim was a fun loving and energetic dog, some would say beyond hyper. He had trouble calming himself down, and sometimes he would fidget for minutes, or even hours. He was also easily distracted, at times, or would get so caught up in an activity, he'd refuse to do something more important. Nevertheless, he was very passionate about his hobbies and was dedicated to them (and still is). Jim was also a prankster; this could lead him into trouble with authorities quite often. He loved listening to and making jokes; it was hard to catch this dog frowning. Jim could be stubborn at times, however, and surprisingly persistent. He had quite the temper as well, and usually talked in a loud voice. If there was one thing he definitely lacked at the time, it was self-esteem issues; Jim was extremely self-confident, and sometimes it came off as borderline narcissism. However, Jim saw it as pride, and cockiness at worst.

However, Jim's personality started to change around age 12, when his home was attacked. He realized that he needed to start acting more mature and calm if he truly wanted to be respected as a fighter, and that life wasn't just a game. As Jim entered adolescence, he matured even further, becoming more rational and cautious.

Jim is now a level headed, more sensible teen. He is still passionate about his hobbies, likes to crack jokes, and has an optimistic outlook on life, but his overall personality has changed drastically. He has also learned to control his temper, and now speaks in a normal tone. Jim is not as confident as he used to be, but he has by no means low self-esteem. His daredevil, risk taker attitude has also disappeared, lowering his impulsivity. He now takes time to think about consequences.

Jim's most notable skill is martial arts. He excels at karate (being a black belt), and is also a great kung fu artist. However, his defensive moves are flawed. He also has experience in swordsmanship, though he is nowhere near a good swordsman as he is a martial artist.

Jim can bite and claw for self-defense, like most dogs. He can also use his tail as a spring. Jim can bark as well; this is mainly used to potentially imtimidate opponents. Jim also uses tackling enemies as a strategy, or biting them in the neck.

Jim is prone to overheating due to his fur. As a result, he is cautious about entering areas with extremely high temperatures. His tail can be easily grabbed in combat, giving an advantage to the enemy, as they are able to either hurt Jim by pulling on his tail, or fling him by the tail. His power to create crystals can cause him to become fatigued if used for an extended period of time.

Lena and Jim have an unsual friendship. It would seem unlikely for the two to get along, but surprisingly enough, they have managed to become close friends. Lena was the first person Jim had ever met in Northamer, and they have known each other for two and a half years. Jim has even started to develop a crush on Lena, though it is unlikely that she returns Jim's feelings, as Jim is fifteen and Lena is twenty. (More coming soon)

Jim finds Antoine to be mildly annoying. He also disapproves of his cowardice. (More coming soon)

Jim has an average relationship with Sally. (More coming soon) 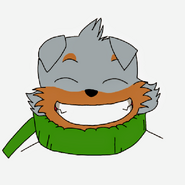 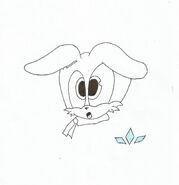 Jim drawn by Leeprower1012! Thanks

Jim when he was 7 years old (placeholder until I draw this design).

Jim as drawn by Skye The White Wolf and colored digitally by me. Awesome! Thank you so much!
Community content is available under CC-BY-SA unless otherwise noted.
Advertisement