I was runt. Because of that, my parents left me in a desert. But don't expect a self-pity party from me. I'm actually grateful for what they did- leaving me in the desert, all alone to die. It's molded me into many things- experienced smuggler, occasional bounty hunter, and a superb hacker! I'm the greatest scoundrel that this planet has ever had! 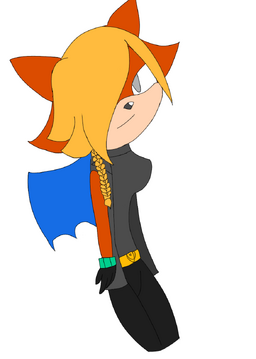 Josephine "Jewel" Jinn is a female Mobian Bat born in the Prime Zone. Despite being only fourteen years old, she is an expert smuggler and also a part-time bounty hunter. She is also an experienced hacker.

Jewel is often coy and sarcastic, often not taking things seriously- except when it involves her. She is almost always selfish, but is sometimes willing to apologize when she offends someone. However, if someone offends her, Jewel will hold a grudge for a while, depending on how much she was offended. Jewel, unlike Rouge the Bat, dislikes flirting. She feels it's a waste of time that could be used to instead do something actually worthwhile.

Jewel is very secretive about her smuggling operations and likes to keep her contracts quiet- especially if the contraband she is smuggling happens to be very illegal. Jewel also likes to keep her operations as a bounty hunter relatively quiet. She tends to do her tasks wearing a disguise, depending on whether or not the bounty is legal or illegal.

Jewel is also very self-centered and egotistical. She thinks she's the best of the best when it comes to being a scoundrel. She also often likes sticking her nose in business that isn't her own. Whether or not something even remotely involves her, she'll be looking for information on anything that interests her- especially if it involves a potential client.

Jewel also likes anything involving computers, especially hacking them. This often causes her to be over-enthusiastic and shows a slightly geeky side of her- though her enthusiasm isn't enough to really consider her a nerd.

Jewel is capable of fighting both on the ground and in the air, though she is more skilled at fighting in the latter. She is an expert hacker, but is incapable of creating programs herself. She also likes to fight at close range. She is able to use some ranged weapons, though not very many.

Jewel also has some form of telepathy, though it's only limited to sensing emotions- including emotions that conflict with one another. She also can use electrokinesis, but rarely ever utilizes this power. She has numerous abilities in athletics, and often uses her flight capabilities to assist in some forms of athletic combat. She also has a high dexterity.

Because Jewel's telepathy is limited to only emotions, there are times when this ability is pretty much useless- such as talking with someone who either can naturally or is trained to block out telepaths. She also can't use her electrokinesis in certain environments- especially water.

Jewel has fluffy red-orange fur, a peach muzzle, and eyes with silver irises- which flash turquoise when she uses her electrokinesis. Jewel has yellow-orange bangs that almost entirely hide her eyes, while the rest of her hair is in a pair of braids- one resting on each shoulder. Her wings are a dark cerulean blue.

She typically wears a dark grey tank top with a matching sleeveless jacket, a gold belt that holds up a pair of black pants, and grey hiking boots. She also wears black gloves with teal cuffs.

"Go AWAY!"- Jewel, annoyed by someone

"So it's Mr. Goody-Two-shoes again. How's the family?"- Jewel greeting a rival

"All I hear is 'blah blah blah, you can't beat me, blah blah blah!' Yeah? Well, prepare to get the butt-whoopin' of your life, mister!"- Jewel challenging someone to a fight

Retrieved from "https://sonicfanon.fandom.com/wiki/Jewel_the_Bat/Julia%27s_Version?oldid=1853018"
Community content is available under CC-BY-SA unless otherwise noted.