Jewel the Bat (ジュエル ・ バット)  is a teenage Mobian from Dark Mobius. She is also part the The Dark Freedom Fighters.

Jewel was born in the future. Rouge raised her, while Shadow trained her. She liked Shadow more than Rouge, and spent much more time with Shadow. One day, when Shadow let Jewel play at the park, Jewel saw an adult Babe (Dark Mobius counterpart to Cream), with a small Rabbit-Bee hybrid. Jewel asked if she could play with the hybrid, Cream responded, saying yes, and the two talked and played until Shadow said it was time to go home. When she was thirteen, she joined the Dark Freedom Fighters, along with her twin sister, Jenny the Bat. Weeks after that day, she and her sister found two Chaos Emeralds during a mission. They did chaos control and a portal appeared, Jewel and Jenny went into it and they went to the past. Jewel met a younger Shadow, and Jenny met a younger Rouge. Jewel and Jenny stayed in the past, because they liked it there. Jewel was told by a mysterious G.U.N. agent to join G.U.N., and Jewel did so. She seemed interested in it, and joined because her mother did, and she was inspired.

The Return to Dark Mobius

Jewel had done something bad at G.U.N. Though they did not know it was a mistake, they kicked her out anyway. Jewel felt bitter inside, and she began to think. She would go home. But, she did not know how to get back. The Chaos Emeralds had disappeared mysteriously.

Jewel's personality is a mix between her dad's personality and her mom's personality, but mostly her dad's. She's thinks that she's 'charming'. She is a bounty hunter, and will sometimes act like a tomboy. Jewel is shy, and will talk with a shy voice. She likes to be left alone, in peace. Jewel is kind and tries to be as polite as she any to anyone, except for the Villains. Due to this, she's best friends with Cream the Rabbit. Dispite being a pacifist, Jewel is still willing to fight for mobius and her freedom.

Jewel is a red flying fox with maroon markings on her bangs, ears, eyes and hair. Her eyes are large, almond shaped and pink. Jewel has a tan muzzle, and the inside of her ears are also tan. The bat's hairstyle resembles Rouge's, except for the fact that it's longer and includes two bangs. Despite being a flying fox, her muzzle is quite short in length, much like Rouge's and Tails'. Jewel's wings are all black in color, and she has a short tail. The only makeup she wears is pink lipstick.

Add your character here if he/she is Jewel's friend! 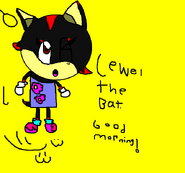 Jewel drawn by me.

The unfinished redesign (no longer related to any canon character)
Add a photo to this gallery
Retrieved from "https://sonicfanon.fandom.com/wiki/Jewel_the_Bat?oldid=1780689"
Community content is available under CC-BY-SA unless otherwise noted.