Darkest Shadow, the author of Jessie the Fox, considers this page to be unfinished. As such, some sections may change.

Gross. Let's get this straight. We're not friends. We're not going to be friends. Ever. You're weird and obnoxious, and like that's not cool. Now, do me a favor; make like a bee and buzz off!

— Jessie telling Michelle to buzz off 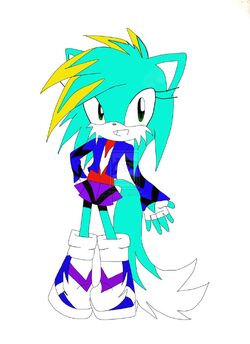 Jessie the Fox is a character created by Darkest Shadow. She is the captain of the MCA Allstars Lv. 5 cheer team, and seen as one of the more popular girls in the academy.

Jessie is described to be snobby and mean to many other people. She tries to avoid people that she would find "weird" and "creepy". She is very negative and always sees the downside of things. Every time she sees a person that she doesn't like, she tries her best to avoid them. She has that disgusting, rude, popular attitude that most "popular" people have. She doesn't like people invading her personal space, unless it's for cheerleading. Any time she sees something disgusting or weird, she'd just run away from it.

Jessie is actually very popular in her school. She is said to be one of the cool and funny cheerleaders, and likes to be a class clown. She can't stand teachers, just like she can't stand creepy students. After school, she hangs out with her friends and she gossips about the people that she doesn't like. This makes her very secretive as well. Lots of people get weird suspicions that she doesn't like them. But nobody really cares about what she thinks.

However, a few people describe her to be rude and fake. When she is cheerleading, she completely trashes her gross nature, and all the sudden becomes peppy. Right when the cheer practice, or competition is over, she would usually go back to having that dull look on her face.

Currently standing at 3'6 and keeping her weight a secret, Jessie is a fox with light blue fur and white skin underneath her fur. Her muzzle, part of her tail, and inner ears are also white. Her muzzle is actually furry and has three tips on each side. Her hair is the same color as her fur, and it goes down a little over her back. The front side of her bangs that are on the right side of her face have yellow dye on the ends. Her eyes are disconnected and her pupils are green.

Currently, she wears a MCA cheer top that is red with a v-shaped white stripe. Over that is a blue jacket with a black zig-zag design on the sleeves. She wears black, red and white spanks, and it is mostly covered by her purple skirt with a black v-shaped line. She also wears white fingerless gloves. For footwear, she white and blue boots with a white strap and a purple v-shape on the middle of the shoe, and white soles.

Cheerleading- Throughout her life, Jessie was raised to be a strong, confident and outstanding cheerleader. She is able to perform all kinds of flips, tricks and stunts. She also has the courage (and weight) to be lifted into the air by one to four other people. She can also lift other people into the air. All of this is done with a smile on her face. She is probably the best at flying, as her flexibility and power from her jump make her perform jawdroping stunts.

Singing- Jessie also has a pretty good singing voice. Not to long ago, she started taking voice lessons. As of now, her voice is slowly improving and she is hitting many high notes. She is in the high school choir and honors choir.

Fencing- A sport that she has been taking since the age of ten, Jessie is a very good fencer. She is able to easily and quickly jab her foes and parry other attacks with her sharp épée, foil, and saber. She has been developing and honing her fencing skills to become a highly skilled fencer.

Electricity Manipulation/Fulgurakinesis- Jessie has been trying to master the power to manipulate electricity for quite a while. She learned this from eavesdropping over Michelle's lessons. Now, she is trying to find a friend to help her get better at this ability. As of now, she is okay, and can manipulate thundersocks and drain electricity from wires to heal herself.

"Get away from me."_Trying to escape from people she doesn't like

"You're not good at cheerleading.... or life."_ Trying to trash-talk Michelle

"Gymnastics isn't as hard as cheerleading."_ Being mean to Michelle

"May the best team win, YAY!--That was stupider than the last one."_ Her fake cheerleader personality

Retrieved from "https://sonicfanon.fandom.com/wiki/Jessie_the_Fox?oldid=1690644"
Community content is available under CC-BY-SA unless otherwise noted.