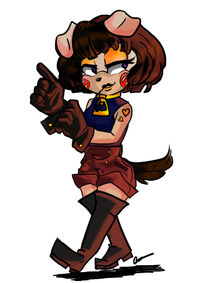 Jesse is a reckless youthful spirit who wants nothing more than to talk about herself and the services she offers. She’s the kind of person to laugh at the inappropriate times, yell unnecessarily loud, and only care about the people around her if she can benefit from them or a given situation. Although she may have an ego bigger than her purse, she utilizes it to conceal her personal feelings out of fear of getting hurt, thus the reason why she escapes intimate relationships.

Growing up in a low-income community, Jesse contributed to keeping the people she lived with safe and fed for the most part. She doesn’t remember early childhood memories dating to back when she had her original body but alternatively recalls the exact date and time she agreed to trade her identity for a favor. The smell of lemongrass cause her to recall minute fragments of her memories, but other than that she can’t explain what life was like before becoming a Reinos siren.

Jesse is a Reinos Siren, meaning she’ll accomplish any task given to her in exchange for her host’s identity. She has the ability to shift into identities from previous trades, therefore allowing her to change into multiple figures like a deck of cards. Overall, stamina and speed are primitive traits found linked within her wardrobe of identities.

Some of the skills that she has that seem uniquely and utterly unthought of for many mortals, but an absolute luxury to her kind, such as snapping, licking, and wiggling. She can cook a legendary frittata, and mimic bird melodies by whistling. She’s great at important remembering dates and people, as well as information that is useless to her, but meaningful to the people around her.

Retrieved from "https://sonicfanon.fandom.com/wiki/Jesse_Otis?oldid=1835711"
Community content is available under CC-BY-SA unless otherwise noted.