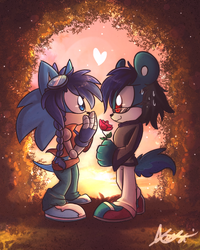 Jeremy is a light blue mongoose slightly shorter than Reens. He has darker blue hair and crimson eyes. His muzzle and the insides of his ears are white, and he wears a pair of glasses on his face.

His attire consists of a maroon and grey turtleneck, white pants, and maroon and blue shoes with grey soles. He will sometimes wear a pencil behind his ear to use in his notebook.

Jeremy is extremely shy and timid, avoiding confrontation like the plague. Among his friends, he is considered the shyest, and also the most calculative. He never really shows strong emotion unless provoked.

Jeremy first met Reens when he moved to her high school. He watched from afar as she dealt with a few bullies that were bothering fellow students. This was when his one-sided crush on her began. He thinks she is one of the most beautiful people in the world, though he would never admit it to her face.

Jeremy also met her boyfriend at the time, Leonidas the Tenrec. They had a sort of teacher-mentor mechanic, with Leonidas teaching Jeremy how to exit his shell more.

Jeremy can sense how long a person has left to live by looking at the color of their aura. It ranges anywhere from green to red, green meaning a long life and red meaning a short life. Other than that, he has no powers.

Jeremy has no major abilities except a heightened sense of hearing.

Jeremy is a good artist and songwriter, though he hardly shares it with anyone except his closest friends. If he is cornered, he will throw a few weak punches before cowering.

Jeremy is allergic to peanuts.

He hates being confronted.

He can't see well without his glasses.

Retrieved from "https://sonicfanon.fandom.com/wiki/Jeremy_Hawkes?oldid=1874271"
Community content is available under CC-BY-SA unless otherwise noted.