Start a Wiki
This is an article about Jenna Unuri, a fan-character created by Chica Nunnally!

The author of Jenna Unuri the Kitsune considers this page to be unfinished. As such, some sections may change. 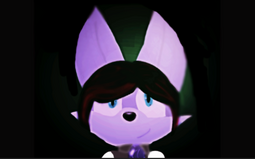 Jenna bears a striking resemblance to her ancestor, including - but not limited to - the silver fur, the twin tails, and the gold-flecked turquoise eyes.

There, however, the resemblance ends, as Jenna has long black hair that goes to about below her shoulder blades with bangs that frame her face and pink highlights.

She wears a white shirt with a black leather vest, dark blue pants with a silver-buckled black belt and knee-high black boots with a white stripe going down the middle and white soles.

Jenna doesn't even wear jewelry like her ancestor does, instead opting for a black choker with a silver crescent moon around her neck. She's rarely seen wearing a ridiculously long scarf, the color of which being various shades of blue, which she frequently trips over. As a result, she isn't seen wearing it all that much.

Jenna is curious about new things, such as history and culture, but she's agoraphobic like her ancestor. She gets nervous when a belief of hers is challenged. She's also a bit reserved and stands up to people when her rights are threatened.

She is observant and will sometimes say "Seriously?", usually in response to somebody saying something stupid. She is childlike and energetic, which occasionally annoys her allies. She's also a bit thrill-seeking and enjoys a lot of traveling.

Jenna is somewhat expressive when she's confused, and stoic in situations where a person tries to be funny, but fails. She loves collecting items from her travels.

She usually rambles about her ideas - like a solution to breaking into a building and getting past security - and doesn't realize that a few of her friends have no idea what she's talking about. She also gets temporarily jumpy after a battle.

Jenna also sometimes uses words that are almost obsolete in the English language (or the Mobian variant). Examples include: groke - to stare in hopes of getting food; fudgel - to pretend to work when you really aren't; zwodder - a stupid state of mind.

Jenna doesn't like to rush into battle - instead, she prefers planning ahead for most situations. She also enjoys reading when she's bored and doesn't have much else to do. She also takes an interest in other languages and dialects across Mobius.

Jenna is capable of temporalkinesis, or the ability to slow down time without affecting the manipulator. This gives her a great advantage in the battlefield when her enemies are very strong and difficult to defeat. However, she must use this power sparingly so her energy does not become depleted.

Jenna is ambidextrous, allowing her to do most tasks with both hands, writing, wielding weapons, etc. This gives her a small advantage in the battlefield when required to multitask.

Jenna is able to read some code, albeit not all. This can help her in situations in which she may have to identify types of programs or even hack into systems.

"Seriously?"
—Jenna when somebody says something stupid.

"I'm a pirate, not a physician!"
—Jenna complaining about tending to wounded crew members.

"Did you just...?"
—Jenna just after Monty accidentally repeated her catchphrase.

Retrieved from "https://sonicfanon.fandom.com/wiki/Jenna_Unuri_the_Kitsune?oldid=1743365"
Community content is available under CC-BY-SA unless otherwise noted.