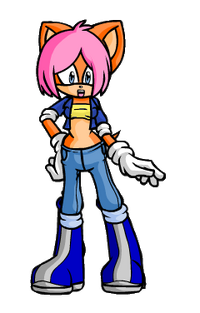 Jenna the Hedgehog (ジェンナ・ザ・ヘッジホッグ) (Jen'na za hejjihoggu) is a Girl DeviantArt Exy Pictures Quicksand and Mud, the reborn orange hedgehogs and pink hair are alive (like my friends Girls Lina & Kia) and she as an DeviantArt of every new team collaboration is the Team Heroes and Good and his new mobius friends and so Sonic and his friends added to the team Sonic on Good and New Created Logo YouDevianArtTube.

Made by Fan-Made with Female Furry Doll Maker by geN8hedgehog

Jenna and his friends Sonic, Tails, Knuckles, Amy, Cream and many all just mission and bunch and enemy Team of Evil and Evil, Eggman Empire & Villainsivakia.

Jenna The Hedgehog Joined Dimensions Worlds in 2024 and so the new teammate is called Team Heroes and Good That, She's Love 19 years old Slovakiaman Boyfriend and anyway Evil Slovaken If he still tried an experiment on the calf and was defeated,And Saved world Wedding Years Later , and then she died in 2104 that that Agent Puppeteroic had kidnapped his brain in the Mobians Spacecraft and also the 19-year-old parent and also 5 Hero's Flag and leave for Sonic the Hedgehog world, and then he Puppeteroic has to fix heal the brain and he still is alive she is orange hedgehog and pink hair and so he came to Planet Mobius, and then it's the enemy Evil Slovaken-lians turn back to the Eggman Empire and had to revive and then maybe everything is And Lina & Kia is Alive is back Girls Friends change Mobius Animals.

Meet the Jenna The Hedgehog and His Grils Lina & Kia.

She's making Picture & Videos YouDevianArtTube & More about this Studios making what's a for all.

Retrieved from "https://sonicfanon.fandom.com/wiki/Jenna_The_Hedgehog?oldid=1867991"
Community content is available under CC-BY-SA unless otherwise noted.