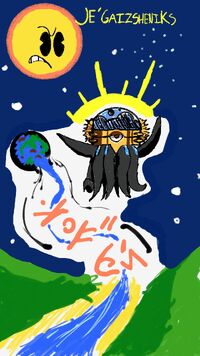 Je'Gaizsheniks has ten tentacles and burgundy skin. Xe wears a special suit to protect xirself from non-aquatic environments. Xir helmet has a broad stainless brass rim with intricate details for the base, and an aluminum glass dome with a custom animation on top to cover the head; both pieces are connected by tubes that refilter the water inside the dome. On xir tentacles, xe has miniature tubes higher up that bring in water to moisten them, and a trapdoor underneath so xe can eat.

As someone worshipped as a god, Je'Gaizsheniks is narcisstic, and spoiled, yet cool and sometimes goofy. Xe would often contradict xirself mid-sentence (i.e. claiming xe's omniscient but admits to not know what it means) and isn't regarded by many other Xorda as a competent. Xe is dependent on the aid and protection from xir highest-ranking knight, Cyroteios. Xir naïveté is manifested by xir trusting Cyro, despite the fact that he is clearly a nonbeliever, and even Gaiz's pope Almane fails to convince xir. Xe constantly strives to be seen as a hero, yet even gets nervous around xir followers. Despite xir usually carefree demeanor, xe does care for xir friends, and does whatever xe can to keep xir loved ones safe.

Gaizsheniks was hatched on Xorda as the next heir to the Jetdor of Movyes, in the palace nursery. Xe was the only child of Je'Hamasi, and was sheltered from the rest of the world to attend private classes to learn xir duties as royalty and how to rule as a jet. When xe became 55, xir father stepped down and bore the "Oen" prefix; once Gaizsheniks was officially crowned as Je'Gaizsheniks, Fir'Narvolix of the Dhniote Zuboyem declared war on Movyes. Although this frightened the Movyesites, after a few skirmishes Narvolix realized that the declaration was premature and abruptly called the war off. Now that xe was able to focus on other things, Gaizsheniks began a project to create a slave race in case Narvolix attacks again. Xe started making deals with a nearby alien race, the Nibirans (more specifically, the Annunaki), and paid them for the DNA of nearly every species on Earth (the DNA the Anunnaki gave them were of the animals that would follow the Earth's global flood). Even though this purchase left only a quarter of the country's budget, Gaizsheniks secretly hired pirates to steal human DNA from the traders. Xe then had xir scientists convert the human DNA into sound waves, and then altered the animal DNA with the sound to create the Mobians. After the scientists successfully created Mobian mammals, reptiles, and avians, they were working on the arthropods when a mob of Movyesites angry with Gaizsheniks's spending attacked the facility and destroyed some of the equipment, until police were sent down to pacify them. Hastily, Je'Gaizsheniks colonized an uninhabited green-zone planet in a nearby solar system and had nurses raise the first Mobians there as their "angels". To the surprise of Movyes and other privy Xorda, the project was a success. The Mobian civilization grew on the planet now named "Mobias" (I Pray) under the guidance of Gaizsheniks. Centuries later, the Mobians have entered their medieval era, but on Planet Xorda, Narvolix is now a global threat, and is bent on capturing Movyes. As xe planned so long ago, Gaizsheniks recruited his greatest Mobian soldiers (along with Cyroteios and Almane) to fight against xir rival. However, Narvolix invades Mobius and convinced several nations to follow him instead, and with that Mobius was plunged into a world war. Je'Gaizsheniks, in an effort to swiftly eliminate Narv's threat, resorted to nukes, but miscalculated the enemy's position and accidentally (and ironically) nuked Almane while he was praying to xir at Gaizsheniks's temple. This angered Cyro (who was fed up with xir anyway), and the two get into a fight after Cyro tried to avenge Almane. Gaizsheniks convinces Cyro to help him once more, and they both save the Gaizuvoe nations from being conquered.

Although Je'Gaizsheniks is terrible at orating, xe is skilled in business, politics, and was a prodigy in war strategies.

As an aquatic life form, Je'Gaizsheniks must breathe in water and keep xirself moist in order to survive. Xir suit is not fitted for combat, which makes xir vulnerable to assassins.

Retrieved from "https://sonicfanon.fandom.com/wiki/Je%27Gaizsheniks?oldid=1837745"
Community content is available under CC-BY-SA unless otherwise noted.