Oh, spare me the pity party speech, Infinite! A lot of people have died because of you. You brutally slaughtered those people. You may think that it was out of your control, because of your hatred of those weaker than you, but you are wrong. You had a choice. And you chose genocide. Because of a stupid, self-conceited reason. I'm gonna be honest with you. It will come back to bite you, one way or another. Maybe not because of the Resistance, but something, sometime and somewhere, will do it. I can only pray that you will make the right decision then. 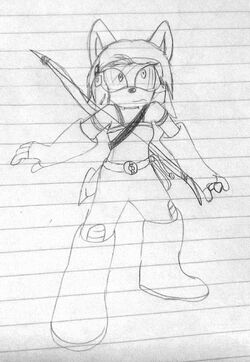 Jayda-Su Pryovolt is a female Echidna born many years after the events of SUFS1: Dr. Finitevus, Post Genesis Wave. The timeline split sometime during the roleplay, keeping the original timeline intact, while the new one trailed into chaos. Due to the split timeline, as well as time shifts, a being known as Infinite was sent to Mobius. Infinite, still weak from the effects of the Genesis Wave, went into hiding and kept a low profile.

Over twenty years later, Jayda's father Xavis was supposedly killed in one of Infinite's attacks (who for some reason, teamed up with Eggman), and then both Arronax (Jayda-Su's brother) and Chloe-Su (Jayda's mom) vanished. As a result, Jayda decided to join the Resistance, where she would learn that Eggman had also captured and killed Sonic.

Despite this loss, Jayda would continue to support the Resistance, and later meet her to-be fiance, Bartholomew Gehring.

Jayda-Su's history is very different from her original counterpart's. She knew nothing of Xavis' past, other than the fact that she was named for someone close to him. She also didn't know of the power he possessed, as the Chloe-Su and Xavis of this timeline we're a lot less open about their history.

Jayda would often ask about how they met, or why nobody would tell her about her grandparents, or why Xavis would collapse now and then, as if he were in pain. But no one, not even her parents, would answer her questions. At one point, when she was twelve, she sought out the somewhat seclusive family friend Isaac the Hedgehog for answers, but learned he had long disappeared in The Underground due to the threat of someone called Infinite. He hadn't been heard from since.

Once, a few years later, Jayda-Su saw a guy on television shooting an arrow with his bow. It was for a type of competition that had been done for years, although Jayda didn't know until then about it because she preferred reading over television. Not to mention none of her books mentioned archery, as they were mostly about science fiction or detective mysteries.

She desperately wanted a bow of her own, and so after a very long discussion, she got her wish. Jayda began practicing once a week with her bow, and became a pretty good shot with it- to the point where she started hunting animals in the nearby woods. She managed to get the occasional rabbit or grouse. Jayda-Su was often confused when she and her mother would lug the fat creatures all the way to the butcher so he could skin it and such, because Chloe-Su said she found the whole thing somewhat repulsive. Jayda noticed that sometimes, while they sat waiting, Chloe would stare off into blank space, as though she was suddenly lost in time. Like she was reliving memories. Or deep in thought.

Jayda-Su knew better than to ask, because she wouldn't get a straight answer.

It was not long after this that an attack from Infinite and Eggman would shatter her world.

Jayda-Su had been hunting in the woods when Eggman attacked the city. She heard the explosions and ran all the way home, only to find that there was nothing left but a pile of ashes.

She was then pursued by a squadron of Eggman's robots, who chased her to the downtown section of Mobotropolis. They were about to kill her (as her arrows were useless against the robots' armour) when several people jumped out of a nearby building and started shooting at the robots. The bots were quickly destroyed.

One of the people, an Echidna, introduced himself as Knuckles the Echidna. Jayda, despite being a relative, did not recognize the name- since her family was rather secretive about their heritage.

Knuckles offered her a position in their ranks, stating that they needed every person they could find in order to defeat Infinite. Jayda accepted the offer, but only on the condition that they search for her parents and brother first.

They searched the city, but did not find Jayda's parents or brother. All they found was Xavis' sword Destiny, which had been covered in the debris of a large building. Jayda-Su presumed that Xavis was killed in the collapse, but held onto the possibility that he may have survived somehow.

The group left the decimated Mobotropolis and headed to the nearest Resistance base. There they learned that Sonic was captured and killed in the attack. Despite this loss, they, especially Jayda-Su, hoped that they would manage to defeat Eggman and Infinite and bring them both to justice.

Jayda-Su's personality is relatively the same as her original counterpart. However, she's more outspoken and is more quick to voice her opinions. She tries to negotiate whenever possible, and holds onto the hope that peace can be made without bloodshed. She is willing to accept it when negotiation won't work, and will fight to protect her friends by any means necessary.

Also, Jayda has less of a fiery temper than her original counterpart. It takes a lot more to get her angry, and when she does get mad, things will most certainly not go smoothly. Jayda is also very stubborn, and can even become very sarcastic sometimes.

Jayda is skilled in her psychokinetic abilities, and is able to perform actions such as telekinesis, empathy (similar to telepathy, but for emotions instead of thoughts), and pyrokinesis (inherited from Xavis).

She also tends to use a bow and arrows, and sometimes a gun (but rarely). Jayda is able to pull off shots with her bow from long distances. She also carries a whip with her, similar to her original counterpart. This is useful for closer quarters, when her archery skills wouldn't work very well.

Jayda-Su is not able to withstand very low temperatures, much like her father Xavis. Her powers also take a lot of energy, so they have to be used sparingly. Also, she tends to use attacks from a distance, so she is not as skilled in close quarters. And since she uses a bow and arrows more than a gun, she has some difficulty handling firearms.

Also, her pyrokinetic skills are very low, as Jayda-Su has not yet been fully trained in utilizing them. As such, sometimes they can go out of her control.

She wears a dark blue jumpsuit with white markings on the shoulders and upper chest. She also has dark grey elbow length fingerless gloves and a black belt with matching boots. Jayda-Su is also equipped with an orange coloured visor that displays the vitals, as well as other information, about her allies and enemies.

"What, you think I'm just going to leave you here? What could I have done that made you think that?"- Jayda rescuing a friend

"Edge, I know how you feel. But going around trashing everything in sight and screaming at your friends is not going to solve your problems. The only thing it'll get you is a trip to Counselor Rose. And believe me, you don't want that. That girl... never stops crying. It's worse than watching a stupid soap opera!"- Jayda-Su trying to comfort Edge the Wolf

"I like to hide up in a tree and wait for my quarry. Anticipation is always the best part."- Jayda-Su talking about hunting

"Ah, yes... the infamous hotheaded Edge. Be careful where you blow the flames of your attitude, my friend. One wrong move, one single mistake, and we all die because of it. Tread carefully, and we may survive this yet."- Jayda meeting Edge for the first time

"What, do I look like a damsel in distress to you? Ha! You must really be blind."- Jayda-Su's catchphrase

"Underestimate the Resistance and it will be your last mistake." - Another catchphrase

"Sometimes you need less guns and a little more diplomacy."- Another catchphrase

Retrieved from "https://sonicfanon.fandom.com/wiki/Jayda-Su_Pyrovolt_the_Echidna/Forces_Version?oldid=1800706"
Community content is available under CC-BY-SA unless otherwise noted.