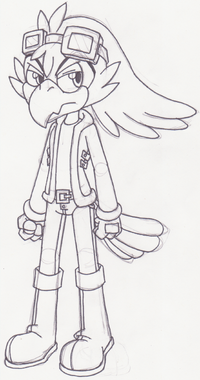 Jayce the Cockatoo is a member of the Tralius Egg Army, and serves under Tralius Sub-boss Dominik the Devil of the Parched Prairie Egg Base. He is an Egg Soldier, as well as an Egg Jet pilot.

A lean cockatoo who stands a little over three feet tall, Jayce has a fairly thick, sharply curved beak, and a medium-length, blunt tail, as well as a large and impressive crest of feathers that typically lays back against his head; it flares up when he is excited or angry.

His feathers are primarily Alice blue in color, with Cambridge blue eye-markings, underarms, and underside of tail. He has no hair on his head, instead having a tuft of feathers on his forehead, and some on the sides of his head, and his eyes are aero in color. His beak is also battleship grey in color.

A speedy and decently strong combatant, Jayce relies on his natural speed to put force behind his swift strikes; his sturdy, curved beak also allows for a nasty bite. He wields a pair of Energy Tonfas as his weapon of choice; they are modified to allow for a core of refined Ictusite, which adds an electric punch to all attacks made using these weapons.

Being a bird, he is capable of flight, and is quite a bit faster in the air than he is on land. His Cyberized augmentations are located in his vocal cords and larynx, and this allows him to amplify his voice to destructive extremes; one loud scream can briefly incapacitate his foes (unless they are entirely deaf), and putting all of his power into a scream can reduce a boulder to rubble; however, he cannot use this full-powered move frequently.

He is capable of basic-level Aerokinesis, and can only use low-level techniques of the Wind Element, such as Wind Needle. He is also a capable pilot, and pilots an Egg Jet that he customized himself; it is armed with a custom machine gun designed to fire electrical shots; it was built by Milabena Roo.

Jayce has no specific resistances to any Elements or energy-types. He is quite fast, and can easily outpace slower foes and evade their attacks; he can also nullify weak Poison-aligned techniques with his Aerokinesis. His Ictusite-core Energy Tonfas also allow him a slight advantage over anyone weak to the Electricity element, namely Water-wielders.

Jayce is weak to the Elements of Earth and Ice. His defenses aren't anything special, therefore he mostly relies on his agility to try and evade potentially devastating attacks. Being physically restrained completely nullifies his Aerokinesis.

A somewhat gruff, no-nonsense type of person, Jayce is nevertheless loyal to his fellow Egg Soldiers, and to his boss, Dominik. However, he is shown to be quite afraid of Dr. Eggman, and of Maw the Thylacine, and has often stated that he is glad he isn't stationed at Maw's base in the Red Outback Zone.

Despite his typically serious demeanor, he is prone to bouts of cockiness, especially when it comes to his prowess as an aviator. However, in a fight, he remains focused, and is not likely to underestimate his foe.

Retrieved from "https://sonicfanon.fandom.com/wiki/Jayce_the_Cockatoo?oldid=1869589"
Community content is available under CC-BY-SA unless otherwise noted.