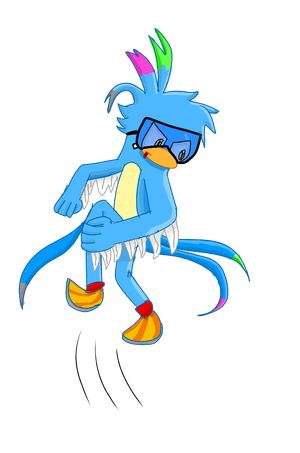 - Plants
Dislikes
- Staying on the ground for hours

Catch the wind and go ahead!

Jay the Parrot - Custom character made by this user. He is a young parrot, most known for his love for flying. Actually he couldn't fly before meeting Knuckles and Tails due to the fact that no one wanted to teach him before.

Jay is a blue, anthropomorphic parrot with three different from the rest feathers on his head. All of this three is blue with gray/pink/green on its top. Jay wears a pair of glasses than he can change into more flying-help version (it hides his eyes, but actually makes the vision better). He has three, darker tails with the same colors as the top feathers. On his foots, Jay wears orange boots with yellow stripes. Jay's wings (or hands) also have a plenty of white feathers on it.

Jay is always a cheerful, happy soul. He is very friendly to everything, but it doesn't mean that he always appears friendly to evil. Due to the fact he is still young, Jay is naive and it's easy to trick him (Sometimes Eggman uses this weakness for his own plan). Young parrot has a strong sense of justice, so he can forgot about his fears only for helping weaker ones. Jay has a strong connection with flight: When he was a kid, he wanted to fly into the skies and look at his home from the high heights.

For this moment it's work in progress.

Jay is seen to be a great flyer with his wings. Looks like he is also strong, so he can carry someone on his back while flying. Like almost every character in the series, Jay can run very speedy, so he can come after Sonic or Archie. He can also make a attack called ,,Sky Hammer". It means that Jay flies up high, and then attacks from the air with ultimate speed. That breaks some of the breakable blocks and destroys enemies. Jay can stay in the air for a while (That looks like Knuckles's gliding in Sonic The Hedgehog: The Movie).

Using the 7 Chaos Emeralds, Jay can transform into the Super Jay. In this form, he is much speeder and stronger. While transforming, his feathers are lighter, and a pair of wings made of air appears behing his back.

Retrieved from "https://sonicfanon.fandom.com/wiki/Jay_the_Parrot?oldid=1835423"
Community content is available under CC-BY-SA unless otherwise noted.