Start a Wiki
This is an article about Jane the Hedgehog, an adopt made by aldanaaldana on DeviantArt and adopted by Spyken (Emidikun on DeviantArt). 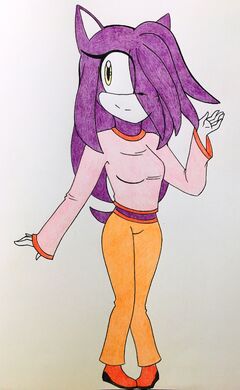 Jane is a purple hedgehog with purple fur, pale yellow eyes and a white muzzle. She has long quills both in front and behind her face.

She currently wears a red and pink long sleeved top along with light brown/orange pants and red/black shoes.

In her younger years she wore her back quills in a ponytail.

Jane is a headstrong, no nonsense person. She is the type to always go for her goal no matter what and also expects others to do the same. She can be quite stern and strict with others, but she always means well.

She has an affectionate side to her too, as she cares deeply for her family, being deeply distraught when she was separated with her son and nearly breaking down when it happened with her daughter.

Jane the Hedgehog was born the eldest of five children. After her were her three brothers, followed by her sister. Being the oldest of the bunch, she regularly had to assist her parents with taking care of her siblings and helping out in the family's store. While she genuinely liked helping out, she didn't like the fact that her parents didn't show any gratitude for it, her mother being overworked and her father just expecting her to do what she does.

One day, while her father kept pestering her to keep working more and more, not being satisfied with anything she did that day, she did an interesting discovery. When her dad scolded her for, in his eyes, never working seriously, she lost her cool and smacked her hand on a nearby table, smashing it in the process. After a moment of silence, her father apologized and excused himself. Meanwhile Jane was left wondering just what had happened.

After consulting her mother about it, she revealed to Jane that it was a recessive ability possessed by her family, which they called the Unbreakable Hand. Using this ability, an user could harden their hands, rendering them very durable and allowing them to break almost anything with their hands. She also said that it was a very long time ago that someone had manifested this power. Intrigued by this, Jane sought for another opportunity to use the ability, wanting to master it. She even started to train in hand-to-hand combat, but never managed to manifest it.

One day, she saw an old lady get robbed of her purse and immediately went after the culprit. Managing to corner him, she tried taking the purse back and nearly succeeded, but she soon found herself surrounded by his friends. Instead of running away, she tried taking them all on. She thought that in time her powers would manifest, but it wasn't the case. She was pinned to a wall, but before anything else could happen, she was released from their grip by two of her younger brothers. They tried protecting her, but the thugs had brought wooden clubs with them, whcih they used to overpower the three hedgehogs.

Seeing her brothers getting hurt greatly distraught Jane, to the point she was practically begging to just hurt her. To spite her, the thugs responded that they were going to let her watch them pummel her brother until they lost consciousness. Jane shouted them not to, but they went through. Just when they were going to hit them, they heard people agonizing from pain and were shocked to see the thugs that were holding Jane lying on the ground, while she was standing there, visibly furious.

Leaving the brothers be, they all immediately went after Jane, who effortlessly brought them down with one hit each. Those confident because of their weapons also went ahead, but were surprised as she broke their clubs like it was nothing and also brought them down with one hit. They were almost going to flee, until their boss came around with an iron club. He put up a better fight than his underlings, managing to dodge getting hit. After some time, Jane stopped attacking. Seeing his chance the thug attacked, but was very surprised when she just catched the club with one hand.

Squeezing through it, she ordered them to leave. Not wasting any time, the thugs did just that. She immediately went to her brothers afterwards, asking them if they were alright in a visibly shaken tone. The oldest said yes while smiling to her, while the other one just nodded. Tearing up, she grabbed both of them and apologized for the trouble she had caused them. the oldest told her she didn't have to, they just did what they had to do and in the end she was still able to overcome the problem herself, being very awesome at doing it in the process. Very awesome indeed, the younger brother thought to himself.

After giving the purse back to the old lady, they went home. Directly after arriving, her father scolded her for their physical condition. Jane directly assumed all responsability and then quietly listened to her father while he scolded her. Her younger brother tried to intervene, but she told him not to. She then responded that while she didn't do the most responsable thing, it still was one of the best experiences she had had. She said she felt something new, a purpose. She said that she always wanted to be more of use, and had just found out how she could be. Against her father's wishes, she left home to join the Freedom Fighters.

She became a promising rookie after joining, carrying out orders perfectly while keeping her cool and always prioritizing the safety of citizens. Due to her ability and the way she could handle most situations (having nerves of steel), she quickly gained her longstanding nickname, "Iron Fists" Jane. She had her share of suitors, but she wasn't interested, putting her work as the priority and finding most of them to be too childish anyways. Someone who also took an interest in her was another rising star, Solomon aka Surge the Hedgehog.

Out of all the people bothering her, she found him to be the most annoying. Always boasting about his abilities, teasing her repeatly and always telling her that she should just date him, she always had to keep her urge of slapping him senseless. She thought that after enough time he would just lose interest like his predecessors, but he was persistent in his pursuit of her, which actually caused her to give him a bit more consideration, which blossomed into friendship and later love as she got to know him more personally and he disclosed more of himself; like the reason why he was so proud of his powers in the first place. They married when she was twenty-four.

The glory days of the Freedom Fighters were since long over though. Some years after she became active, the Freedom Fighters as a whole all over the world were declared illegal. The act of protecting civilians had become an exclusive task reserved only to government officials and GUN. Any vigilantism was heavily condemned, with some acts even risking imprisonment. At the same time, some people started hunting down members of the Freedom Fighters. Those who didn't get caught joined GUN or went into hiding. Not wanting to be bound by rigorous codes of conduct and wanting to have a family, Solomon opted for the latter, with Jane following him. Sometime later, he and Jane were had two kids; Spikes and Silvia. The four of them had a pretty nice life together.

Her family was suddenly kidnapped one day, because a rogue organisation wanted to experiment on her son for their Project Sonic Reborn. She, her husband and Silvia were at first held together in a cell, but were still treated rather nicely, until a certain discovery caused them to be transferred to a labor camp.

At the camp, Silvia and her parents were separated from eachother. While they were sent to the deepest levels of the site, Silvia remained on the first . When she asked for her parents' whereabouts or why they were even separated in the first place, she was always met with silence. The reason was that her parents' identities had been found out and their captor Eggman Nega had plans for them.

After escaping inprisonment, Solomon went on a journey to depose the current GUN commander, having discovered he was working closely with Nega. He decided with Jane that it would be better if she returned home for their children, and not tell them the truth just yet.

After officially deposing the commander, Shadow took over the job, with Solomon as his second-in-command, taking the name Agent S.U.R.G.E.. He returned home afterwards, finally reuniting with his children.

Nerves of steel: While not explicitly an ability, Jane is known to be able to keep a cool head even when in the most dire of situations, enabling her to calmly analyze every problem at hand. This also caused her to take a leadership role multiple times.

Master hand-to-hand combatant: Despite being mostly self-taught, Jane is very adept at fighting in hand-to-hand, developping her own fighting style revolving around punches, grapples and takedowns.

Unbreakable Hand: A recessive genetic ability coming from her mother's family. It greatly strengthens the durability of the user's hands.

1 of 3
Add photo
Retrieved from "https://sonicfanon.fandom.com/wiki/Jane_the_Hedgehog?oldid=1856537"
Community content is available under CC-BY-SA unless otherwise noted.