It was you! You! You were the one who did this! You decimated Gaia City! You murdered my partner! You've betrayed us all... and now you shall pay the price!

Jana-Su is a female Echidna born in the future of Chaos Mobius.

Jana-Su was supposedly born to an unknown rich family somewhere in Gaia City. However, after the "Great War" and the practical annihilation of Gaia City when Jana-Su was only two years old, taken into the orphanage. Gaia City was soon rebuilt and so she continued to live there with an unknown foster family.

She soon found that she had a very high intelligence despite her young age and she read a news article about above average schools that were taking in new students. This led to Jana-Su managing to get herself listed as a gifted child and being transferred to such a school.

Jana-Su developed an interest in the law by age eight and by the time she was twelve she passed the E. L. S. A. T. and entered law school. Jana-Su, by age fourteen, became a lawyer and junior partner to one of the most influential lawyers in Gaia City, Tasma Invone. Then out of nowhere, Gaia City was being bombed.

A mysterious tiger with unusual Chaos abilities then arrived at the scene. Upset by the carnage, he attempted to save Jana-Su and several other survivors of the bombing. When he tried to save Jana-Su and the others, he noticed she was very depressed. He then realized that he had failed to protect Jana-Su's partner, Tasma, and that the Ocelot's limp body was lying nearby. Jana-Su wanted to fight "The Flame" and kill her for murdering Tasma and for the genocide of Gaia City. However, the mysterious tiger convinced Jana-Su that now was not the time. She then made the vow that she would eventually kill "The Flame" for her actions, and so Jana-Su and the survivors left with the tiger.

With those survivors safe, the mysterious tiger then received news of "The Flame" attempting to kill any remaining people in the decimated city. He left Jana-Su and the survivors he rescued in a safe place and he went off to fight "The Flame" alone. Jana-Su hadn't seen the tiger again, but about an hour later, a group of civilians suddenly appeared before her.

Jana-Su has light evergreen fur and dark teal hair (which appears evergreen in most lighting) that is tied back into a ponytail. Her spikes are rather short on the sides of her face, whereas the ones on the back of her head are longer. She has icy blue eyes and typically wears a white blouse with a black tie and matching black pants and a brown belt as her lawyer outfit, but when she had to fight against "The Flame" she donned a grey long-sleeved turtleneck shirt with dark blue shorts and black and white knee high boots. Jana-Su hates wearing gloves, so she won't be seen wearing any.

Jana-Su is a very stubborn girl and is also what one would describe as "a person who is told to do one thing, but goes and does another". She is extremely antisocial and will often wave away a person when they try to speak to her. Jana-Su also dislikes being around loud noises and will try to stay as far away from them as possible. Jana-Su also expresses a deep hatred for "The Flame", who conquered and practically enslaved Chaos Mobius. She is willing to kill her no matter what the cost and is determined to gain vengeance on what she has done.

She also prefers to be strategic- never doing anything without planning. Jana-Su also has a horrible temper and will often be seen yelling about something. She hates it when people touch her and is somewhat germophobic, often washing her hands unnecessarily frequently. Jana-Su is also extremely vengeful, and will willingly kill anyone who harms her friends.

Despite being raised in a world where people shun Chaos Force manipulators, Jana-Su chose to embrace her powers- which did not get her very many friends. However, she continued to freely use her powers- an example of her usual stubborn behaviour.

"Time is not on our side. We have to act fast or we'll lose the case!" - Jana-Su speaking to her partner

"Down with her!! Down with the scum!!! She killed our family... our friends... everyone we ever cared about. 'The Flame' deserves no mercy... she'll suffer... just as we have suffered." - Jana-Su rallying together the Nova Resistance

"Why don't you just kill me now? You slaughtered everyone in that city without a second thought... why are you so hesitant to kill me, of all people?!... Let me guess, you want to watch me suffer by twisting my own thoughts?... my memories..." - Jana-Su struggling against "The Flame's" thought manipulation device

"Go away- I'm busy!"- Jana-Su shooing someone away 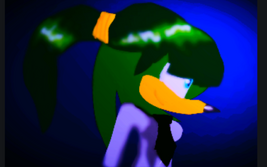 Jana-Su in her lawyer outfit- Artwork by Julia Finitevus
Add a photo to this gallery
Retrieved from "https://sonicfanon.fandom.com/wiki/Jana-Su_Ezri_Odan_the_Echidna_(Chaos_Mobius)?oldid=1799938"
Community content is available under CC-BY-SA unless otherwise noted.