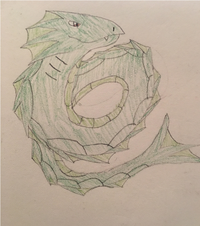 Jamon'ishi is a large serpent with hundreds of dark green scales covering him from head to tail. His slit-pupiled eyes are bright red, while the membranes of his large fins running down his back and ending in a 'paddle' shape are yellow-green. His relatively soft underbelly is also yellow-green and ends near the end of his long body. Jamon'ishi's most prominent feature are the fins on the side of his face, located just behind the cheek.

Jamon'ishi is curious and kind hearted. He is very friendly to land-dwlellers and is keen on learning new things about their species. The serpentine can be quite hyper when excited, and is a bit of a talker. Jamon'ishi has developed a small disliking to Enerjak, even though that he or any of his race was disturbed by his takeover due to what he has done to both Downunda and Mobius as a whole.

Jamon'ishi, like most mythics, have the ability to communicate with others who are not their own kind via telepathy, speaking with his mind. Wielding an Aetherstone cancels this affect.

While underwater, Jamon'ishi can snap his jaws together, making a small ring of bubbles followed by a concentrated beam of compressed water.

Jamon'ishi has both lungs and gills, able to breath both in the water and on land.

Jamon'ishi is naturally able to see in complete darkness, due to his original home in deep sea trenches, where sunlight doesn't reach his home.

Jamon'ishi knows the seas surrounding Downunda very well, though he does occasionally gets lost and makes a new mental map in his mind to get back to his territory.

Jamon'ishi has a bad memory, being able to forget things very, very easily. He may forget something important, forget what he was going to do, or forget what happened two minutes ago.

Retrieved from "https://sonicfanon.fandom.com/wiki/Jamon%27ishi?oldid=1776603"
Community content is available under CC-BY-SA unless otherwise noted.