You wanna tell me what the fuck you were thinking?! I know that they're ugly but what on earth did they do to you? This is so much worse than anything else we did. When we did the terrible things we did, we didn't take anybody's lives, they're all alive and well and... well ugly. Never would I have thought you'd be capable or have the mental state to kill those people. I'm disgusted at you. There's a special spot in hell for shitheads like you. See you never, bitch. 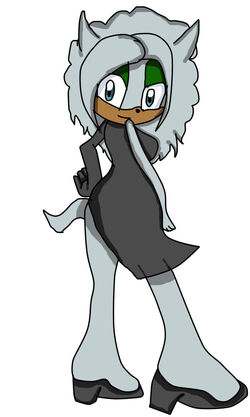 Jamie the Dog is a fan character created by Darkest Shadow. She is a member of Team Fashion, and one of the main villains in the Mariala Anime. Her main goal, like Mimi and Chloe, is to conquer the fashion world and kill Christina.

Jamima Annabelle Sanders is a 21-year-old terrier from Mariala City. Jamie had quite a tragic early life, both of her parents abandoned her, so she lived with her close friend, Mimi. The two, along with two other girls, Chloe and Krys, were seen as fashion superstars in their hometown of Kinzville.

The four then moved to Mariala City, where they formed their team, Team Fashion. They then found a girl, Christina, who won all the pageants. Mimi later transformed the objective of Team Fashion from winning pageants into ruining Christina's life. About a month later, Krys left the group after seeing Mimi's true intentions and crossed over to Christina's side, making her a superlative enemy. The three remaining members continued to traumatize Christina and her friends for years.

Years later, the team leader, Mimi expanded her goal to instead of making Christina's life miserable to making diabolical machines, usually in the guise of beauty products. They started robbing banks, burning buildings, and much more. This made her and her team wanted criminals worldwide.

Jamie and Chloe then found out some bad news about Mimi that shocked them and changed their moral views on her. Mimi killed four innocent people, and injured several others. Jamie was absolutely disgusted, as she flew down to the facility where she was held hostage to tell her just how disturbed she was by this. Team Fashion disbanded after her capture.

From this, Jamie changed who they are and made a video and posted it online to apologize for the years of misery and terror. She talked about how people really do change, and then later gathered up the people of Mariala City to talk about it. There were mixed reviews, and people made it a controversy on whether to forgive her or not.

Jamie used to be described as a big, mean bully. Like Mimi and Chloe, she thinks that everyone is ugly, except for Mimi and Chloe. Lots of people are feeling hurt because of her. When others are upset, she's happy. When it comes to making others feel bad, Jamie's the one to call.

Some aspects of Jamie also made her seem like a brat. Like a mosquito, she wouldn't shut up and everyone tries to get rid of her.

Like her team, she had evil intentions. She usually invented the products that her friends make for evil pruposes. She also loved to physically abuse, and torture others.

Clothes Designing- Jamie can make pretty cool designs. Her designs aren't very brilliant, but they sure stand out.  She sometimes makes idividual lines and combined lines that she created with her friends.

Intelligence- Jamie is usually the brilliant thinker of Team Fashion. She could always find inspiration and comes up with the ideas of the Team Fashion's evil projects and machines.

Retrieved from "https://sonicfanon.fandom.com/wiki/Jamie_the_Dog?oldid=1824065"
Community content is available under CC-BY-SA unless otherwise noted.