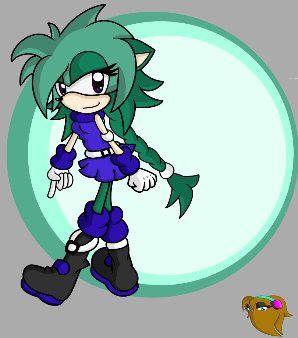 Jamie is a rather kind, quiet person, which goes hand-in-hand with soft-spoken. She is rather naïve for her age, and often doesn’t get the “other meaning” to what some people say. She is a cheerful individual, usually always seen with atleast a slight smile on her face. One of her greatest flaws is her adversity at the sight of blood, which causes her to shriek, along with spiders, snakes and the like.

Jamie is just-above-average height for a mobian (4”0), along with a rather lean-build frame. She has fair skin, pale green fur and dark purple eyes. She wears her hair in rather messy bangs all over her head, with a long, plaited pony tail reaching past her knees.

She wears short, pale blue dress that also covers her neck, with a white belt that has a black buckle that sits off center. She wears white gloves with blue fabric rolled up on the ends. He wears a plain, white band around her left arm, with a matching one that ties up her pony tail. She wears black and blue boots, with her dark blue matching socks reaching up to her knees, with similar belts hanging of the boot itself.

Jamie is a rather fast runner, though nothing that could be considered “super-human/mobian”. She is a rather intelligent person, almost bordering on genius level, though this is coupled with being naïve, due to her personality. She is a rather competent swordsman for her age, able to hold her own against multiple foes for a short while. While she can fight, she is not one fully suited for combat. Despite this, she has above-average durability.

Not Started / To Be Created

Not Started / To Be Created

Retrieved from "https://sonicfanon.fandom.com/wiki/Jamie_%22Jade%22_Mystina?oldid=1672913"
Community content is available under CC-BY-SA unless otherwise noted.