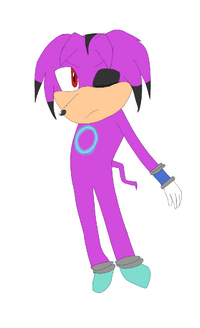 Jake is a purple-spined and furred echidna, with black markings. He bears a strange blue, glowing circular marking on his chest, a marking he presumably inherited from the now-extinct clan he descended from. His fangs are a pearly white, and are well-maintained. Average in weight and not very muscular, this echidna's weak stature makes him poor in physical combat. His blood red eyes are about the only trait of his that looks remotely threatening. Jake's quills are shorter than most echidna's. He has the typical zigzag tail of other echidnas, though.

Jake wears white and blue gloves with grey bangles on them. Additionally, he wears blue-green boots made out of a strong material; they also bear the grey bangles on his gloves.  When outside, he wears a warm, heavy, brown jacket with some animal pelts on it and beige leather boots; this is due to the cold climate he lives in.

Jake can climb on walls like Knuckles. He has an I.Q. of 144, making him a genius. Jake uses his machines to battle for him, most of the time. But when he does not have his machines, he can put up a good fight. Jake has a power called "Power rage". It is a powerful punch that he can use. It does not always work, but most of the time it can knock out the target for 10 seconds. it's not that strong, but it's useful for Jake. Jake also has the "Echidna blast", Jake can charge into the target with this move. Also like Knuckles, he can dig with his gloves. Most of the time when he doesn't have his robots he uses his fists to fight. Shadow has taught Jake chaos control, due to their new 'friendship'. (improvements in process)

Jake, unlike his brother, Isaac (or by his friends, "Venom"), has an overall calm attitude, and likes to take things slow. He is a very intelligent and cunning Echidna, and his speech is often poetic. Jake is kindhearted and wouldn't mind cracking a joke or two, but occasionally he'll snap at others, though only when they push him far enough. He is a natural gentleman and also a feminist, though often attempts to court women he sees attractive. Jake is also highly protective of close friends and loved ones, especially his younger brother. A heavy drinker, when in slight gloom Jake often finds comfort in large doses of alcoholic drinks, especially wine.

Jake was born out of wedlock to noble Echidna Uriah and his then-maid Katherine, whom Uriah courted. Due to his illegitimacy, Jake was often picked on by other children; his mother was always there to defend her son and soothe him. Six years and five months after Jake had been born, his brother Isaac hatched from his egg. Though there was something strange about the infant, and Jake's father seemed to grow more bitter each day. His father started to lose sanity, knowing that Isaac had an evil essence about. Finally, Uriah snapped, and abandoned both of his sons in the wilderness, keeping it a secret to his maid and chaps. Yet miraculously, an elderly female woodchuck stumbled upon the boy and infant, and took them to the nearest orphanage. They seemed to stay there for years, and the woodchuck eventually decided to adopt them.

From a very young age, Jake has had an interest in mechanics. As a child, he would take apart broken machinery to see how they operated, sometimes even fixing them. Knowing that his passion for machines was great, Jake decided to pursue a career in machinery. 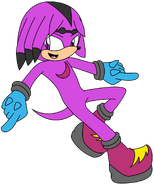 A somewhat creepy chibi of Jake.
Add a photo to this gallery
Retrieved from "https://sonicfanon.fandom.com/wiki/Jake_the_Echidna?oldid=1822249"
Community content is available under CC-BY-SA unless otherwise noted.