Start a Wiki
This is an article about Jaden The Hedgehog, a character created by BlueRingsGamingCo on 11/21/2013.
This character is a recolor. Please consider drawing some of your own art, or removing the recolored images.
Jaden The Hedgehog 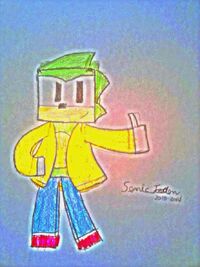 Jaden the Hedgehog is a lime-green recolor version of the famous video game character and mascot of SEGA; Sonic the Hedgehog. He was created by Jaden "ZeroPC" Garner in 2010 and later appeared to the public on various social media platforms.

Jaden is a lime colored hedgehog and wears a cobalt blue zip-up jacket with jeans and red shoes. His hair styles resembles the same as Sonics. His jacket can also change colors to affect his Energy Saber such as electric yellow as shown above, red, nature green, and silver.

Jadens first online appearance was on Google Plus in 2013 as a role playing account used by the young creator. He then appeared on Instagram a year later with the username @jaden_the_hedgehog. The accounts were mainly dedicated to online friendships and showing off artwork and recolors. The Instagram account was ditched in late 2014 and the Google Plus account was reformed into the creators real name with his original game mascot as his profile picture; Puppy.

Jaden also appeared on Steam as a role playing account. The account went through several changes before finally ending and settling with the name ZeroPC. Its role playing behavior was discontinued.

Jaden also supposedly makes a cameo as a playable character in Sonic Colors in Game World as the lime recolored Sonic. However, multiple sources confirm that none of the recolors in the game were supposed to be actual fan characters.

Jaden attempts to be as kind as he can be, even in distressing times. He is often very approaching to those he is comfortable around. Jaden however can have a temper. If things don't go as planned or if his friends are at risk, he will step and often break out in anger. His friends safety is always his number one priority.

Jaden was born in a small town in Mobius known as Peacekeep. While exact details are unknown, he somehow managed to acquire his trusty Energy Saber from a fallen star. When he eventually met his original Sonic the Hedgehog, he vowed to protect those he cared about and joined the fight for freedom.

Like Sonic, Jaden can use the homing attack, spin attack, spin dash, and tornado attack as well. However, Jadens main form of attack is his Energy Saber. With it, he is able to strike enemies with multiple strikes and slashes. He can combine his speed with his Sabers abilities for devastating attacks.

Jaden has acomplished multiple amazing feats throughout his journey through all sorts of platforms. Some of which include:

- Stopping a space colony from crashing into earth

- Reversing the flow of time

- Battled and defeated 3 energized creepy pastas all at once

- Survived being pressed between 2 females

- Sliced a mountain in half with his Energy Sword

- Survived an explosion equal to 6 supernovas

While Jaden isn't known for being a bulky character, he has his downfalls. Jaden has a temper that can break lose if he gets upset, and if he takes too much damage, he won't be able to stand up again.

Jaden also has a fear of sex and sex-related actions. On multiple occasions, Jaden has been kidnapped and even raped by other female OCs, thus developing a fear for certain situations. To make up for this, Jaden remembers that his mission is to protect his friends and those he cares about, but even then, comes a weakness.

Jaden will lose complete control if a close one of his is harmed in any way. He has recovered before with outside help from his other friends

- Jaden is the only lime recolor to have a Wikia page.

- Despite the many pieces of art shown on the page before, none of them are actually Jaden. Jaden is only a recolor with a jacket and jeans as his costume.

- Jaden is one of the only OCs in the world to have his own game series.

- Jaden the Hedgehog was discontinued after 2017. However, the creator still likes to give the recolor some cameos and references in various events in his life.

- Jaden is one the only OCs to be afraid of sex.

- Jaden is one of the only OCs to have different dimension versions of himself.

- The profile image above is a Minecraft interpretation of what Jaden would have looked like had original artwork been created. Alas, it is the only one that can be shown to follow the sites guidelines.

Retrieved from "https://sonicfanon.fandom.com/wiki/Jaden_The_Hedgehog?oldid=1853947"
Community content is available under CC-BY-SA unless otherwise noted.