Start a Wiki
This is an article about Jadelk "Jad" The Wolverine, a character created by Flametfh.

"I assure you, You'll meet lots of people on your journey forwards."
—Jadelk The Wolverine

Jad is a Short Wolverine for Moreaus.

Jad is a Short and Average weight Wolverine with a rather menacing look about him, He has a Rather muscular build, he has a bit of an odd posture, he leans forwards a little bit while walking (Though not as bad as Flame) he wears white gloves and has sometimes got claws attached to them, he wears jackets during winter, Has a belt with a pocket on, He wears White and red shoes, He has somewhat greasy hair that has 3 spikes at the front and has small flairs coming out of the front.

Jad, despite his menacing appearance, as a very bright and friendly person, He cares for his friends and often cheers them up, though hes very hot-headed getting angry alot and getting into fights, He is a little bit nerdy making references and using very odd words, Despite this his intelligence is barely above average. Jad suffers from slight Autism, In the form of Asperger's Syndrome, He has trouble looking at people's faces, And infact only looks in the eyes of people who are closest to him, He is also socially awkrawd and has trouble having conversations that aren't one-sided. Alot of people seem to pick on him, Generally because of his Nerdy tendencies and that his Autism makes him seem strnage. On an un-related note,He has a noticible Lisp, when speaking he pronounces "S" As "Th" for example instead of saying "Misisipi" he will say "Mithithipi" I won't type it during roleplays as Its too much work, But characters can bring it up.

Jad was brought up in Moreaus a planet that has parts plagued by war and parts that are covered in nature, these often conflicted, He came for a Small village that was build in the tree-tops, He was very happy while he was there, Unfortunately he had to be evacuated as a Gang of Bandits raided his village and Killed most of the people he knew, He stayed in a refugee camp for a few years, Here he learnt how to craft things, He was very good at it and was often asked to make things for other people staying there, At the time of leaving he was 8, What was left of his family had made enough money to go to a nearby town and stay there (This is where he met flame) He made alot of friends there, and started taking combat lessons, At present times he lives in mobius though often goes back to moreaus using his Hoverboard, He goes to school there as well as selling music.

(Please put your names if need be)

Jad, Being a Wolverine can use claws as weapons, And is very good with them.

Jad is a good combatant, Being good at attacking and defending

Jad is very good with music, hes a musician, and even uses a Guitar as a weapon, He also plays guitar and is a Great singer.

Jad is very good at making things, He can Build well and Craft well.

Jad has been shown to be able to use Nature-Spells, Things like Invisibility, Vines and Drain.

When fighting his fighting style is very odd, Compiled of Boxing, Pro-Wrestling and Street brawling, He seems to switch between styles (Simmilar to flame) His first one is when he stands 3/4 from the opponents with his arms down (Like in his picture) here he will do In-accurate swinging punches and a sweep kick, He will also try and do a powerful running punch but fall over and instead do a powerful shove (This stance is his main stance, his swings are very wild but its effective) His 2nd one is where he stands facing his opponents with his arms up, Here he will do a block (That actually works) He will also do a Leaping Plancha and a in-accurate over-head punch(This is a defensive stance), His final stance is when he stands 3/4 to his opponent with one of his arms up higher than the other here he will do a right jab and a left hook then a wild swing(This is his fastest stance, he doesn't use it much because its the weakest of all of his stance)

Jad has a strange fighting style, Which often confuses the oponent he specialises in moves like Dizzy Dance, A strange flurry of spinning punches and kicks that knocks the enemy away, or Guard breaker, A kick where he grabs the enemy and yells "THIS IS [Insert place here]" and also Ancient Smackdown, A move where he goes with a combo of punches and kicks, Much like dizzy dance but it is stronger and takes more energy, He often calls this his ultimate physical move.

Not only is Jad a strong physical fighter he also can use his guitar to aid his allies, With moves like Harmonious Song, That aids his allies working like a healing spell or Sharpness ballad, Which acts like an Attack boost, And other simmilar moves.

Jad is a very agressive person, And well get in fights for no reason.

He often Underestimates himself and won't realise what hes good at.

Jad is a very brave person, this can get the better of him, Very often.

He cant fight long range, Or use that many weapons in melee.

While he is good at hand to hand combat, He can't fight well with eapons, only being able to fight with claws and guitars, and his attacks aren't really that fast

Jad is very fraile, He cannot take many hits before getting hurt, He is also not incredibly perserverant. He makes up for his low defence by being remarkably strong and a jack of all trades though.

"Oh right, My name is Jadelk or 'Jad' For short." -Introducing himself (A crisis, Zone under fire)

"Lay a finger of my friend and you'll be eating through a straw!" - Intimidating someone to leave Flame alone (Speedy's story) "Was it that well written?" - Questioning Terra's response to a Letter (Valentines evacuation)

"It's time for a new sediment!" - Initiating in battle (Multiple occasions)

"Hey Terra! Calculate!" - Getting Terra to activate her 'Shipping Powers' (A crisis, Zone under fire)

"Yeah, Ermm, Sorry for your loss" - Remorse for Crymson's brother's death (Caught in the Crossfire)

"Haha! What a laser brain!" - His normal insult (Multiple occasions)

"1962 was a long time ago!" - Making references at useless times (Multiple occasions)

"What did he call it? Rythmic reading?" - Talking about Flame's Fighting stype (The Neo stellar roleplay)

"We're the victors!" - Winning something with someone else (Multiple occasions

Jad is based of a close friend on mine, infact he asked me to make a character based of him, Jad's full name is an anogram of the person's name.

Jad is a Peices, and claims himself to be sensitive because of it

Jad is a picky eater and will only eat specific things

It is implied that Jad is bisexual, Though no one knows for sure. 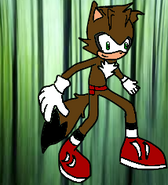 This is my first idea of jad.

Jad has had a slight re-design! New glove cuffs and Different hair!

He looks a lot better now, a lot more menacing.
Add a photo to this gallery
Retrieved from "https://sonicfanon.fandom.com/wiki/Jadelk_%22Jad%22_The_Wolverine?oldid=1544097"
Community content is available under CC-BY-SA unless otherwise noted.