This is an article about Jack the Weasel, a character created by TheSkullWolf on 06/29/2015. 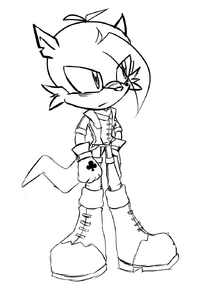 Sorry Jackson, but you're just too predictable. You may be Joker, but I'm the real wild card.

— Jack to his friend, Joker.

Jack Holster (formerly known as Benny Hilton) is a 28-year-old weasel and a main member of The Black Cards. Known by his stage name, The Jack of Clubs, his acts involve the use of revolvers and target practice. He also runs and maintains the circus's clown animatronics.

Jack is a rather tall and skinny weasel. The fur on his front is white while his back and face has a red-brownish color. His white muzzle sports several long whiskers and a small stubble that seems to never grow. He has short ears and a pointy black nose.

Before going off to war, Jack was a rather jolly and charismatic fellow. He was easy to get along with, his many friends being fair evidence to that. He was also considered to be a devoted gentleman, treating his wife, Margaret with respect and often taking her out on dinners and dates.

Unfortunately, the amount of death and misery he experienced while at war forever changed poor Jack. He was not the same man when he was sent back home, and his wife quickly realized this. He became depressed, isolated, and, worst of all, short-tempered. He was then quick to use violence for the smallest of reasons such as not preparing his coffee correctly, eventually leading to the end of their marriage.

Now that he works for The Black Cards, his new persona has completely overshadowed his former self. What was once a kind man is now a snarky and aggressive monster who's only real devotion is to earning a living and self-approval. He has very little patience for those who don't meet his standards and is highly critical of anyone he finds to be worthless.

The new Jack is more blunt and honest. There is never doubt on what Jack thinks about on any matter, as he is always willing to speak his mind whether you want him to or not. Because of this, he easily can come across as rude and inconsiderate, especially if his thoughts aren't what you wanted to hear.

However, even with his hatred growing, some positivy still lingers. Namely, Jack has grown a soft spot for children, finding that entertaining them with his performances to be one of the only things he enjoys about his job. This is rather strange because before his psyche transformation, he had hated children, always finding them annoying. It is likely that this has changed because he sees their potential for having a fulfilling life when his own was taken away from him in an instant when he was drafted.

Jack also seems to show a bit of remorse for his actions against his wife, admitting that his anger destroyed his marriage and scared away the love of his life. However, he never talks about this with anyone.

Domino is the one who keeps Jack from going too far in his attempts to torture the lower members of The Black Cards. While Jack is wary of Domino and certainly does not seem to like him, he does show a certain degree of trust.

Benny and Johnson were old war buddies. Johnson was a well-known wisecracker in the military, gaining him the moniker of Joker. Unfortunately, the two went their separate ways after the war and lost contact with each other for several years. It was not until after Benny's seperation from his wife that the two comrades had found each other again. Benny, looking to reconnect with old friends, discovered his old friend living a relatively quiet life running his own mechanics shop.

He seems to like her slightly more than Domino.

Being a war veteran, Jack is an excellent shot when it comes to firearms. He can score a hit from several meters away, especially when using a handgun, his preferred weapon of choice. Following the years after he returned from war, Jack has regularly visited firing ranges, leaving his overall accuracy the same as when he was a soldier.

An..."accurate" representation of Jack's friend Joker.
Add a photo to this gallery

Start a Discussion Discussions about Jack the Weasel