This is an article about Jabrony the Hedgehog, a character created by Red-fist on 07/24/2013. 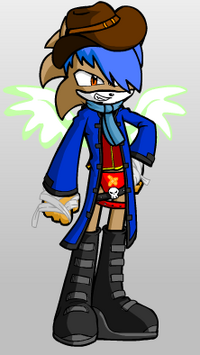 Jabrony (Pronounced Ja-Bro-Ney) is a Hedgehog who only has one thing on his mind and that is to kick ass. Don't steal or the OC police will get you.

Jabrony is a brown hedgehog with blue hair covering his left eye. He wear a brown fedora and long black boots. He also bandaged up his hands as a way to protect his fist when he punches things really hard. He also wear a light blue scarf, a red vest and a blue overcoat. His eye colors are red in his right eye and blue in his left eye. He wears two belts around his upper legs to lower body. And he wears a red speedo in reference to Franky from One Piece. Jabrony also has green wings on his back.

Jabrony is hot-headed and easy to irritate. He only cares for the next big awesome adventure. He is well liked by most people he meets and is generally a cool guy. He lacks a moral compass and will be on the side of a battle that he feels will give him the most chance to be coo. For this reason he is somewhat of a anti-hero since he can do a lot of good for the good side he can also do a lot of good for the bad side.

Jabrony was original born on a asteroid that crash landed into the Andromeda Galaxy. He was found by two awesome guys with pig like noses that taught him everything he knows including the power of wit. While the Andromeda Galaxy was great for Jabrony he wanted more and thought this galaxy could not control his level of awesomeness. The two guys also agreed and decided to send Jabrony on a rocket in a random (but awesome) direction.

The rocket travels for days on end until Jabrony crash landed onto Mobius. At first he wasn't sure about this place but he grew to like it. He decided to travel the world and go around awesomely kicking butt. On his journey he met a few people including Lord Xen the Fox who was a prince in a fair of kingdom.

While most of Jabrony awesome adventure are in Mobius he does sometime travel to other planets as well.

Jabrony has a lot of awesome power due to living on Andromeda for a while. These powers are;

Retrieved from "https://sonicfanon.fandom.com/wiki/Jabrony_the_Hedgehog?oldid=1852928"
Community content is available under CC-BY-SA unless otherwise noted.