A Sub-boss of the Artika Egg Army, Ivory the Leopard manages the Subzero Glacier Egg Base, and leads the regiment of Artika Egg Soldiers stationed there. She is directly below Artika Egg Boss Tundra the Walrus in terms of rank.

A slender snow leopard who stands a fair bit taller than three feet, Ivory has a somewhat short muzzle with a triangular nose, fairly small, rounded ears, and a long, slim, yet densely-furred tail that fluffs out more near the tip.

Her fur is primarily steel blue in color, with a white muzzle, inner ears, chest and stomach, as well as a collection of dark cornflower blue spots, stripes, and rosettes covering her head, back, shoulders, thighs and tail; the tips of her ears are also dark cornflower blue in color. Her hair, which is straight and grows a fair bit past her shoulders, is soap in color, and her eyes are amber in color.

Ivory wears the standard Artika Egg Soldier fatigues, which consists of a bright navy blue parka that has white stripes down the arms and faux-fur trim in the hood, sleeve cuffs, and hem, as well as white gloves, black pants, and charcoal-colored boots that also have faux-fur trim cuffs.

Not long after the Subzero Glacier Egg Base was set up in the Frozen Plateau Zone, and Ivory was appointed to watch over it, Eggman, having heard rumors that a legendary artifact of ice could be found inside of the Shiverstone Caves, ordered Ivory and her regiment to scour the icy caverns for it. Eggman wanted the artifact to serve as the core for his currently in-production creation, christened the Egg Reaver.

However, despite spending weeks searching the caves for any trace of the artifact that Eggman described to them, Ivory and her regiment turned up empty-handed. However, they did manage to discover large amounts of ore and minerals, and while the doctor was displeased with Ivory's failure, he knew he could still take advantage of the rich deposits of minerals found within the caverns. So he ordered Ivory and her regiment to set up mining operations within the Shiverstone Caves, and eventually settled for a large Frost Sapphire to serve as the core of his Egg Reaver.

Ivory was secretly unhappy with Eggman's demands; the caverns were rather treacherous, and she did not much like the idea of any of her regiment getting lost or hurt in there (a couple of her soldiers had already gotten hurt falling down a small ravine within the caverns, but were swiftly brought back to the Egg Base for recovery).

But, of course, she knew better than to defy the doctor's orders, so she did as she was bidden; a horde of Burrobots and Excavators were employed to serve as the primary laborers, while she and her soldiers oversaw operations, as well as hauled mined materials back to the Subzero Glacier Egg Base via sleds pulled by robotic reindeer.

It was about one month into the mining operation of Shiverstone Caves. To Ivory's delight, there had been no reports of injuries among her regiment, yet some soldiers were coming back with worrying claims. They had apparently been hearing odd noises coming from the deeper areas of the caverns; noises that sounded suspiciously like snarls.

Ivory tried to brush off these reports, stating that nothing could possibly live inside of these frozen caves. The place held no life to speak of, plant or animal, and there was simply no way a creature large enough to make those noises could survive within the caverns without a substantial food source. But the reports stuck at the back of her mind all the same...

Being a leopard, Ivory has superb eyesight, and also has a great sense of hearing and smell; she is also a fair bit stronger than she looks, but her true strength lies in her legs. She is armed with natural armaments in the form of sharp claws and teeth, and is unafraid to use these while in a fight. She also carries a laser rifle as her primary weapon, and is a decent shot with it, although she generally prefers to fight up close.

The Cybernetic enhancements to her already powerful legs have allowed for a monstrous increase in strength, allowing her to jump thirty feet straight in the air, and leap a distance of thirty feet. Her devastating kicks surpass those of kangaroos and most ungulates, and she can easily break through steel with one kick. The Cybernetic enhancements also allow her to run quite fast, at about 60 mph, and give her great running stamina. They also let her travel through deep snow without tiring easily, although it does slow her down significantly.

She is capable of moderate Cryokinesis, and primarily uses physical/melee-range techniques of the Ice element, such as Freezing Slash and Frost Kick. She does have some ranged/energy based moves in her arsenal, but they consist only of weak, low-level ones.

The Extreme Gear that Ivory predominantly uses to get around in snow-heavy regions.

Ivory is relatively resistant to the Elements of Ice and Water (her Ice resistance is somewhat higher, however). She is also quite fast, able to dodge slow-moving opponents and attacks with ease. The Cybernetic enhancements in her legs give her great running stamina, as well, allowing her to travel for hours even in deep snow; however, she typically opts to use her Extreme Gear for this instead, as it is significantly faster for her.

Her thick fur also gives her great protection against both the cold and against weak, Ice-aligned attacks.

Ivory is weak to the Element of Fire and Earth. Her defenses aren't anything special, forcing her to rely on her agility to avoid potentially devastating blows. Being a manipulator of Ice, severe ambient heat can render her powers nigh useless, and her thick fur can also leaver her prone to heat exhaustion.

A strong-willed, generally no-nonsense woman often described as "stern but fair". She cares deeply for her regiment, as she was displeased at the idea of setting up mining operations within the Shiverstone Caverns, purely because the place was quite dangerous and maze-like, and she did not want anyone getting harmed or lost.

Ivory is logical and pragmatic, and tries to not allow emotions to rule her judgments. Although her respect and care for her regiment has some emotional basis, the decisions she makes in the interest of their safety are primarily based on logical reasoning, or so she claims. 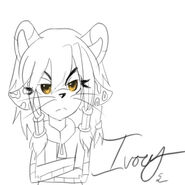 Old picture drawn by Ryushusupercat (Talk)
Add a photo to this gallery
Retrieved from "https://sonicfanon.fandom.com/wiki/Ivory_the_Leopard?oldid=1869853"
Community content is available under CC-BY-SA unless otherwise noted.