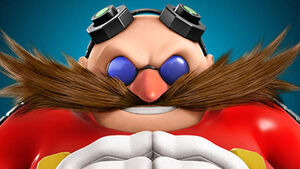 Dr. Ovi (or Ivo) Julian "Eggman" Robotnik is the primary antagonist for Protocol Cy-Fox. He was formerly the founder and Chief Innovation Officer for Eggbot Inc., a Swedish personal robotics manufacturer but styled himself as Emperor of the Eggman Empire.

Born on June 23, 2081 to Julian and Iva Robotnik, Ovi Robotnik distinguished himself as an electrical engineering and robotics prodigy and started his own company, Eggbot Incorporated after finishing college. While trying an unsuccessful stint of being both CEO and chief innovation officer, he left the CEO role to another, more qualified person and continued as chief innovation officer and founder. Always accompanied by his two assistants, the robots Orbot and Cubot, he took pride in the success of the company, not based on stock prices or investment returns but the opinions of high quality and fun that his products garnered. Primarily focused on personal robotics, he especially enjoyed creating toys.

Considered to be ajovial and friendly man, Ovi did put his foot down upon one key rule; no defense contracts. The closest he came was designing robots meant to assist civil services with emergencies and disasters (the original intention of the Moto-Bug and Fire-Bee). He was known to also hold tabletop games with employees, friends and family alike, among them being a young Miles Prower. When Tails and Ovi's cousin Maria started a relationship, he gave his approval of the match and even offered the fox a job after he completed his time in the Keplerian Republic Space Navy.

However when en route to a conference on Kepler-22B on June 3, 2112, Ovi's personal shuttle EGB-01 went out of control and incidentally the repair tender KRSS I.K. Brunel commanded by Lieutenant Prower attempted to assist. The shuttle's engines redlined and gave the impression while in the Warp Gate that the craft exploded, when really the shuttle ended up shifting to an entirely different timeline.

Crash-landed in a forest, Ovi had come to and was removed from the shuttle by Orbot and Cubot and brought to a motorist that was on his way to the crash, Julian Snively of the Guardian Unit of Nations. Confused and disoriented, Ovi rested at Snively's car while Snively surveyed the crash, revealing that the shuttle and technology within was considered advanced for their time and that the three were in an alternate timeline. They were on a future Earth called Mobius, assumed to be in the far future, albeit a stagnant one.

Despite his injuries being healed, Ovi began to crack while working for GUN as a researcher. After finding out about GUN's attack on Space Colony ARK and the imprisonment of this timeline's iteration of his grandfather, Gerald Robotnik and the death of 'his' cousin Maria Robotnik, the scientist started to show signs of instability, playing into Snively's hands, who wanted to use the other's technology to design weapons to both overpower both the United Federation and the Kingdom of Acorn. However the tables would turn over a conversation about the principles of Frederich Nietzsche (a philosopher whose works Snively found and archived from Ovi's computers) as Ovi, restyling himself as Ivo declared that it would be Snively working for him and not the other way around.

Retrieved from "https://sonicfanon.fandom.com/wiki/Ivo_Robotnik_(Protocol_Cy-Fox)?oldid=1822673"
Community content is available under CC-BY-SA unless otherwise noted.