Start a Wiki
This is an article about Isle Togerra, a location created by FunkyTownGang112.
Isle Togerra 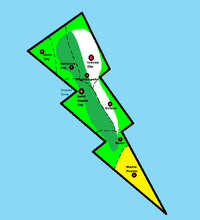 Isle Togerra is the main setting of the Funky Town Franchise and where Becky the Skyhog and the Funky Town Gang live. The island is known for being a big melting pot for Gaian Peoples, as it was the one place the remaining members of many tribes went to for a new life. It is also known for it's lightning bolt shape, and has a mountainous region passing through it, as well as plains, and a desert in the south.

Isle Togerra was host to a few tribes, but became the one place many Gaian Peoples escaped to in hopes of starting their new lives. Those peoples brought with their own customs, cultures, and rituals, and all of those things blended into a very close society.

A great majority of the populations come from tribes from Spagonia, Apotos, Mazuri, the country where Empire City is located, Adabat, and Shamar.

The most notable areas of this island include the Black Forest located close to Saint Angelo City, Crystal Cove, a beach located west from the city, and Seducardoro's Cave.

The main landmark of the island is the mountainous region that goes through it.

Retrieved from "https://sonicfanon.fandom.com/wiki/Isle_Togerra?oldid=1616678"
Community content is available under CC-BY-SA unless otherwise noted.