Start a Wiki
This is an article about Isaac the Hedgehog, a character created by Clairebear165 on 11/19/2015. 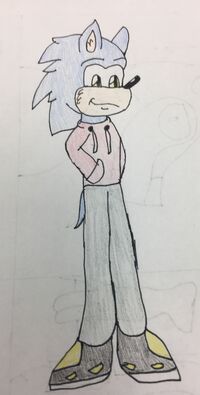 Isaac is a light-blue furred teenage mobian hedgehog with eyes as bright as the sun, pointed ears and slicked quills. His muzzle, chest and belly, the interior of his ears, and arms are covered in beige fur. He wears a dark red hoodie, light grey pants, and black shoes with white soles and yellow markings.

Isaac is a rather friendly person. He tries to be polite and considerate with new people but likes being goofy and messing around. He has a bit of a cocky and snarky attitude and doesn't tend to hold grudges. Though, if people do try to hurt him or anyone he cares about, he doesn't take it lightly.

Isaac grew up in Holoska with his family in the mountains. His only sibling was his older brother whom was named Cadet. At the age of seven, Cadet was killed while trying to protect him from a avalanche. The experience was devastating for the young hedgehog, as he had looked up to his older brother and wanted to be like him.

By the time he was old enough to move out and live on his own, Isaac moved to Northamar to find more job opportunities. There he met Savannah, a cheetah from Efrika and his best friend. Fresh from the boat, he taught her how to speak and write in English. They have been friends ever since.

Isaac was born with hydrokinetics, the ability to manipulate and control water. He can shape it in many different ways, use it for attack or defense, and help with everyday tasks.

Isaac's shapeshifting abilities are connected to his hydrokinetics. Though, for unknown reasons, he can only transform into creatures that live or are associated with water.

Even though he doesn't have gills, Isaac is able to breath underwater. His body is able to absorb the water that gets into his lungs and extracts the oxygen from it. He can only do this for about five minutes before he has to surface for air.

Another ability theorized to be connected to his hydrokinetics is his ability to purify water. He can turn salt and polluted water into drinkable water, though this does drain his energy if used too much.

Tendrils or jets of water. Can be used for offense, defense, and transportation.

Crescent-shaped compressed water projectiles give this attack the illusion of a cutting edge.

Aqua Field is a primarily defensive tactic. It creates a large dome or screen of water to block incoming attacks. This tatic can protect multiple people. Aqua Guard is a smaller version of Aqua Field meant to project just the user.

One of Isaac's more stronger attacks. It creates a water tornado to suck in and disorient opponents, and can destroy larger objects like automobiles by throwing them into the nearby environmental objects such as buildings or large rocks. This attack takes up a lot of energy.

A much more powerful version of Aqua Torrent. This creates a massive water tornado, able to suck in buildings and airborne opponents and vehicles. Can only be used through his Super form.

Isaac considers Savannah his best friend. He cares a lot about the cheetah and loves to mess with her, as he does to a lot of his friends. However, his relationship with Savannah may not stop at just being friends.

Hecate is Isaac's go-to person when it comes to magical concepts. He really likes to call her by her nickname 'the wonderful witch of the east' just to tease her. Like all of his friends, he cares for her well being.

Isaac considers Xavis a good friend and colleague, despite his tendency to accidently distort reality. He likes the brown hedgehog's arrogant personality, sometimes comparing him to a certain echidna in terms of hot-headedness. He doesn't tease Xavis as much as his other friends in fear that he might vaporize him.

Isaac likes Chloe-Su and her nerdy personality, as it reminded him of Savannah. He admires her skill with manipulating Chaos Energy, since he was and probably will never be able to manipulate it firsthand.

While Isaac doesn't hate Eggman, he strongly dislikes the doctor for his constant scheming and plans to take over the world. He finds Eggman more of a nuisance than a enemy.

Isaac knows next to nothing about the Genesis Lord, but all he needs to know is that this mysterious being is bad news and needs to be stopped.

Aegrine is one of the few people Isaac says he hates. This bad hybrid has attempted to hurt and eat his friends on several different occasions, which lead to Isaac's hate of the hedgedragon.

Isaac doesn't find Diaspore particularly nice, either. He doesn't hate Diaspore as much as he hates her fiancé, since she never actually attempted to kill him or his friends.

Tidalburst is Isaac's main super form. In this form his fur's hue is changed to a bright cyan color, eyes turn green, his quills turn upwards. A blue aura surrounds his body and his strength, speed and energy are enhanced. While he can access this form via the Chaos Emeralds, he can also stockpile a ton of energy and use that to transform. This form, however, drains energy very quickly.

Abyssal is Isaac's dark form. He looks much more monsterous than he would in a normal super form. His fur is darkened down to a dark blue, his eyes turn red, his teeth sharpen, and he grows gills on his arms, legs, and the sides of his ears. He can only access this form from feeling intense negative emotions and lasts until Isaac calms down.

Even though Isaac considers himself powerful, he does have his limits. His powers are connected to his emotions, for example, if he were to go into a mental breakdown, his hydrokinetics would spiral out of control, making it difficult to do what Isaac wanted it to do.

Retrieved from "https://sonicfanon.fandom.com/wiki/Isaac_the_Hedgehog?oldid=1846901"
Community content is available under CC-BY-SA unless otherwise noted.