The author of Iris the Echidna considers this page to be unfinished. As such, some sections may change.

Everyone that I grew up with as a child is gone. Thinking about it sometimes makes me afraid to meet new people, because I know that they'll be gone too. B-But I have to remember to live in the present, and enjoy my time with you guys. I...I love you all! 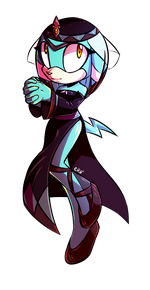 Iris the Echidna is a female echidna character owned by Nikki Kaji. She is 80% Echidna, and 20% spirit, meaning that she is not fully living. Iris usually travels all around Mobius in search of people to help, but mostly stays near Spirit Cove on Angel Island where she was born. She was a part of the Spirit Tribe long ago, and is the last echidna remaining of her tribe due to her immortality.

Iris has the appearance of a female, 18 year old echidna, even though she has been living for many years. This is due to her curse, and the spirits of Spirit Cove freezing her age process. Her fur is cyan, but the bottoms of her quills are black. Her quills are also all the same length, reaching about her shoulders. She also has a black upside-down triangle-shaped black tattoo on her forehead. Her muzzle is white, and on it is a small, black nose (Although it is not seen in the picture). Iris's eyes are dazzling yellow, and glow when she is using the energy of a chaos emerald. When she is floating, she is surrounded with a blue aura.

Iris wears a black bell sleeve, leg cut dress with dark cyan diamond patterns along the bottom of it. There are also dark cyan stripes on the sleeves of the dress, as well as across the waist. Unlike most Mobians, she does not wear gloves or socks. On her head, Iris wears a black hat with dark cyan triangle patters going downwards along the bottom of it. Attached to it is a white veil which connects from one side of her quills to the other, but does not cross over her face. In the center of her head is a silver head accessory, and in the middle is a yellow garnet which matches the color of Iris's eyes.

Iris currently has an ongoing miniseries in The Adventures on Mobius story. It is planned to have three parts, and is basically a small backstory about her. So far in the miniseries, in introduces her home on Angel Island, Spirit Cove, as well as her exploration of the floating island. She discovers the Master Emerald and meets Knuckles for the first time.

Born With a Curse

Thousands of years ago, a group of Echidnas called the Spirit Tribe lived on Angel Island. They were tied with ancient spirits of the dead, both good and bad. Very rarely was there any trouble with a bad spirit, and this tribe usually had good luck for many years. However, a curse was placed on Iris by a spirit after her mother gave birth in Spirit Cove because it was a place where most echidnas weren't supposed to go at all, and especially not to give birth. At first, no one seemed to notice the curse, and no one ever told Iris about it. For most of her life, she lived as a normal girl in the Spirit Tribe. She enjoyed archery, horseback riding, and practicing her tribe dance.

However, on her 18th birthday, Iris and her family were visited by the spirit of another cursed echidna from thousands of years ago, delivering the news that she had been cursed with immortality, and had become part spirit. At first, Iris thought it would be cool to have eternal life, but her parents were heartbroken. As years went on, Iris noticed the true meaning of this curse. Everyone around her was aging; friends, family, tribe members, and her true love.

As time went one and everyone continued to get older, Iris was stuck in her 18-year old body forever. Her parents died 20 years after her age had froze, and her boyfriend was now 22 years older than her. This caused their relationship to be tough on them, Iris feeling more and more heartbroken every day. Her friends were all older than her as well, and they stopped hanging out as much because she wasn't as mature as them.

The years continued to pile on, until Iris's relationship had finally come to an end when her boyfriend we he turned 40. Ten years later, he passed as well, and Iris no longer had anyone close to her. She became a quiet girl, and was soon the only one survivor of her tribe after the chaos attack.

Since Iris was on her own, she tried her best to befriend anyone she could, even though it was very tough to lose them after time went on. She left Angel Island and traveled all across Mobius, helping people in need. People called her the Spirit Girl, because she was such a kind hero when she helped, but would then mysteriously disappear from the scene as if she were never there. But when Iris is taking a break from being a hero, she returns to Angel Island and uses her personal time for things she likes horseback and archery.

Before Iris's curse had activated, she was a very determined and high spirited girl in her tribe. She was always helping her other tribe members whenever she could, and was very kind to them. Iris enjoyed exploring the many different places among Angel Island, and overall just loved the outside world.

However, after Iris had been cursed with her immortality, she had suddenly become more timid and shy around people, usually excluding herself from others. This is due to her loved ones passing away, and due to her not aging, she cannot die along with them. She was left to live on her own for the next thousands of years, and did not like making friends because she feared of loosing them as well.

Iris still does love exploring, and enjoys the company of animals she encounters. Her favorite animals are spirit horses, and she enjoys horseback riding on them the most. They are very kind to her, as she is also very kind to them.

With Iris being part spirit and being cursed with eternal life, this makes her stop aging and therefor does not get weaker as time passes on. She stays in the same 18 year old body and never changes. If Iris takes a deadly wound to the point where the average person would die, her body disappears. Her spirit continues to let her body live, and transports her to Spirit cove where she heals.

Being part spirit also allows Iris to fly and levitate whenever she likes. When she rises into air, a blue, glowing aura surrounds her entire body which continues to glow until she lands on solid ground. Because of this aura, most people think that Iris is using telekinesis when she flies.

When studying a certain person, Iris can read their thoughts and feelings. She can tell whether they're happy or sad, what's on their mind, and what their next move is. Although she rarely does this, she can also talk to someone in their mind and allow them to reply to her as well. This power could be used as a battling advantage as well. If Iris is able to read her opponents mind quick enough, she could predict their next move and counter it. However, using telepathy requires great focus, meaning that it could be hard for her to do it if she's battling someone.

Iris is able to access this form by using the power of spirit energy. This super transformation is only to be used when there is an emergency, and requires the help of the other spirits of Angel Island. When Iris calls upon them, they will use their energy to enhance her powers, increasing Iris's echidna-to-spirit ratio 50/50; giving her a lot of new abilities. When transformed, Iris's quills increase and now reach her back, and all of her fur becomes lighter and radiates in positive energy. Additionally, her eyes change from yellow to blue and her quills are more open and flowy, This transformation also affects her outfit. Iris's dress changes to blue, and the stripes change to the color white.

In her free time, Iris loves to go and do archery. She is a very skilled archer, and has been participating in this sport since she was a little girl. Her aim with a bow is outstanding, which is why she usually carries around a bow and arrow as a weapon. She can pull back and aim an arrow extremely fast, shooting it at very fast and strong speeds.

Iris is also a very skilled horseback rider. Horses were one of the most common animals found on Angel Island, along with more rare variations like pegasi. Iris never got the chance to actually ride a pegasus in her childhood, but always practiced horse taming and horseback riding until the day where she actually could. After being cursed, she became interested in a horse species unknown to mankind known as Spirit Horses. Only spirits were allowed to see and ride on these creatures, and they were very calm and gentle.

Spirit Horses have the appearance of a pegasus, but with very dark colors and wings that stretch out about 5 feet. They are able to run and fly really fast, as well as travel through solid objects due to being spirits. Iris had befriended many Spirit Horses after her curse, and they allowed her to ride on them whenever she liked.

Sacred Bow and Arrow - Iris uses a special bow and arrow which she created with the help of a few spirits, making this weapon extremely powerful. The arrows are unusable by mere mortals, and are even strong enough to pierce through layer after layer of solid metal. When the string on the bow is pulled back, the arrow is automatically generated into place, powering itself up.

Attack: 4 - Iris isn't exactly one of the strongest attackers, and relies more on her magic and evasion

Speed: 6- Iris can go at enhanced speeds if she wants to; usually for traveling but not in battle.

Magic: 9 - The magic abilities Iris has obtained via becoming a spirit is very powerful, and she has learned to use it very well

Intelligence: 7 - Iris has had to learn to adapt to the world around her over the years, making her study more about the many things the world has.

Skills: 7 - Iris has practiced the basic necessities to keep her going

Stamina: 9 - Because her body is still young and strong, she is able to keep up a battle very well without getting tired.

Tolerance: 5 - Despite being a spirit, Iris still can be hit with magical powers, and does not take them that well.

Retrieved from "https://sonicfanon.fandom.com/wiki/Iris_the_Echidna?oldid=1799677"
Community content is available under CC-BY-SA unless otherwise noted.