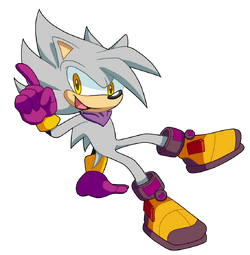 Note that this is my first article in forever and do note that I am showing my updated "cast" of OC's to show my major improvements in terms of story telling.

Raoul Aster A.K.A Ion the Hedgehog is a 18 year old grey anthropomorphic hedgehog with the power of Nuclear Manipulation, He is considered an Amalgamation of Sonic the Hedgehog and Blaze the Cat due to his Connections to the Astral Orbs which are directly created by Deities of both Chaos and Sol. His powers are alone are a mutated form of Chaos Energy and Sol Energy which in turn formed his signature Nuclear Energy.

Ion has grey fur with a peach muzzle, light violet chest fur, and yellow eyes. His fur is spiked up just like Super Sonic but with two large bangs above his eyes drooping down just below his muzzle. He has violet colored gloves with a black triangle on both of the back of his hands and inside them as well. His shoes have dark grey cuffs and bolts with a violet center, His soles are also dark grey. His shoes also have red flexible plates slightly protruding out the sides both inside and outside of each one as well as Jet Thrusters underneath both shoes.

Ion is cocky, carefree, adventurous, naïve and daring to name a few, He tends to take his job seriously as the guardian of the Astral Orbs and only will get serious when things are dire. He isn't easy to anger but when he does get angry he will ignite in nuclear energy which is tied to his transformations.

Raoul Aster was a heathy hedgehog being born from a decently wealthy family. He didn't really know about his powers due to his living arrangements and his parents having no powers at all. He grew up with a normal life with none of his family dying at all, He was raised with heart even through his teens. That is until the age of Sixteen is when he discovered his destructive powers during a fieldtrip to the Astral Shrine. A voice called to him to take the Astral Orbs and protect them and he did the teachers noticed an saw him discover his powers as well, which put two and two together and word eventually spread making him popular in the eyes of the public which quickly spread to his mother and father who knew of the Prophecy of "The Astral Guardian" finding out that their son is the one destined to guard the Astral Orbs, they became happy for him. Raoul was stunned to hear everything at the same time was excited to hear this, this news also was concerning for him as he barely has control over this power and decided to train himself to better control his powers, which he quickly masters over the course of two years, He graduated at the age of 17 just a month before his birthday and he stayed for 2 more before finally moving out to the South District, which is where the rich and famous lives, however, he didn't care about the fame or fortune, he just cares about the world around him, the nice people he can possibly meet, and the wanders the world has in store.

Six months after he mastered control of his nuclear energy and 8 months after his eighteenth birthday, evil finally found its way to his dimension. Dr. Eggman Nega arrives, looking for an energy source akin to the Sol Emeralds and the Chaos Emeralds which led him to Raoul, Now going by the nickname Ion, and discovers the Astral Orbs. Ion never fought evil yet, which led him to be defeated, having all but one Astral Orb being sent away and scattered between all three dimensions. Eggman Nega, Furious, decided to retreat for the time being in order to recruit Dr.Eggman in order to search for the Chaos and Sol Emeralds as well as the remaining Astral Orbs which Ion eventually met Sonic and Blaze who where also in pursuit of their respective artifacts, along with Tails and Amy. They traveled between dimensions and collected all the emeralds all while Ion meets new friends.

Everything led up to this moment after all the collecting and scheme ruining, Ion, Sonic, and Blaze stood face to face with the two doctors for one last battle, All Ion needs is one more Astral Orb which Dr. Eggman possesses. Ion can feel it, Sonic and Blaze fought Nega while Ion went against Eggman Himself. The two battled for a while until Eggman got a cheep shot on him which caused him to drop the six Astral Orbs he possessed. Eggman collected the remainder of the Astral Orbs Ion had collected which he stood no chance once Eggman inserted them into the Egg Naga. Ion started to get beaten to near death until he finally stopped. Ion laid there, dying, before a gentle female voice spoke to him. Tikal chanted the same chant that the knuckles clan carried with them for generations which brought Ion from the brink of death and told him to connect himself to the Astral Orbs by focusing his mind to their power, Permanently link himself to them and unlock his ultimate transformation, Full Burst Ion. His transformation was the turning point of the final battle, Ion Sonic and Blaze continued in their super forms and defeated them before finally fixing everything and saying their goodbyes. Ion now awaits a new adventure from then on which will come very soon.

Ion has many powers, from Nuclear Energy Manipulation, Superhuman Speed and Reflexes, and many other ones that isn't anything special to him, but is still astounding nevertheless!

Ion is quite an acrobat as well, being able to Jump quite high and dodge attacks milliseconds away from impact. Another reason to not underestimate this hedgehog!

Ions signature power, Ion has mastered full control over nuclear energy during his time training himself to maintain it.

Ion can control Chaos Energy but not to the extent to where he's mastered it. He only uses it in combat whenever he has an astral orb in hand. He uses only a few Techniques and only uses it when it is necessary.

Ion can sense energy much like Knuckles, however it is only when he has an astral orb or a chaos emerald.

An extension to Ion's Nuclear Energy Manipulation. He can also create flames hotter than that of blazes' He only uses this attack when going up against robots.

Ion is a VERY quick learner, capable of learning his opponents' own tendencies in mid battle and uses them as exploits to gain a tactical advantage, he also learned to control his own energy and master it within a 1 and a half year time frame.

Ion is very smart and will use his wits to gain an advantage in a fight and has done so during crucial fights over the course of the Astral Chaos Incident.

He is a Close Quarters Combat Master as he did so as a part of his training for his role as the Astral Orbs Guardian.

He is quite cunning strategist and can do creative things to defeat his foes.

Ion is one of the top acrobats in the Sonic Universe and can do many things that most acrobatic characters can do to a high standard.

Ion is unique when it comes to his forms as he has three of them, each one being tied to The Chaos Emeralds, Sol Emeralds, and the Astral Orbs.

Ion's Super State when he uses all seven Chaos Emeralds, the Master Emerald to transform or at least 3 Astral Orbs. Appearance doesn't change much besides a change in fur color and his Bangs spike upwards. He gains a Dark Orange Fur color and his eyes turn Crimson, he also gains a Larger Red aura with an orange tint. He also Reaps the benefits of a usual super form. Nigh-Invulnerability, Enhanced Super-Human Speed, Flight and enhanced techniques.

Ion's Super State when he uses all seven Sol Emeralds or at least 5 Astral Orbs, His appearance is similar to his Ignited form with a few key differences. He gains A bright Crimson fur color and his eyes turn a Yellow-Orange-ish Color. He also gains a nuclear fiery aura and his chest fur is also on fire. This form is much harder to control due to how wild the aura is compared to his other transformations. Just like his Ignited form, he Reaps the benefits of a usual super form.

Ion's most recognizable super form and is completely different from his other transformations.

What defines this transformation is his appearance, Ion gains two additional quills, one on both sides, he also gains crimson red eyes and red markings towards both ends of his muzzle along with orange fur. He gains a hybrid aura between his Ignited and Infernal forms. It is also the strongest form of Ion and is only accessible when he uses all seven Astral Orbs to transform. This form is Ion's potential when it's limits are temporarily broken, Granting access to truly infinite power. He has uncalculatable speed and limitless stamina as well as having all the benefits of a super form.

Ion is Cocky, which is one of his most noticeable weaknesses as well as having Sonic's Trait of not being able to swim. He can get over confident but not as often over the course of the "Astral Chaos Incident". He will often be over confident when meeting new foes and will result in early losses but overtime he learns to overcome this by learning about them.

1/4
Community content is available under CC-BY-SA unless otherwise noted.