Start a Wiki
Ion the Hedgehog 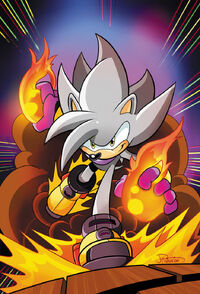 Ion is a cocky yet determined hedgehog. Once there is a threat, he won't stop until the threat is defeated. Going out of his comfort zone to risk his life at any cost. Most people consider him to be a "unique hero" due to this. Ion also has an Angry side, While angry, Ion is brutal and vicious and won't spare the one who has enraged him unless he knows they are not actually an enemy or a threat to Mobius.

Ion also tends to be a bit of a Joker, trying to make jokes even if they are bad ones. however, he does not show this during battles unless he is fighting a rival, only to throw them off or anger them.

Ion is quite a versatile hedgehog when it comes to his powers. Ion has been known to use 2 types of energy, though he usually sticks to his signature energy type

Ion's most used power, Ion can control and use nuclear energy at will, he has yet to master it however but, does plan to completely master this power and be able to expand beyond imaginable comprehension by pushing himself to his limits.

Ion is one of many heroes that has access to chaos energy. This was inherited from his mother due to her connection to the Master Emerald; despite being a hedgehog herself. Ion, however, does not really use the energy as often, knowing that he can do many things that can be used by a Chaos energy user. He only uses it when he Has a Chaos Emerald In hand and uses it to stop time with chaos control. however only when he is sane and not in his "Enraged State".

Ion is also known for his superhuman speed, Ion has gotten this when he was exposed to chaos energy while he was close to the master emerald. No one really knows why he was given this power. He, however, does but, tends to keep it a secret.

Ion has the ability to sense energy types and detect others experience with said energy. He can also distinguish if the energy is unknown to him or a combination of 2 or more energy(s).

Ion Has many abilities, few are relating to his powers. however, Ion is one of a kind when it comes to his abilities.

Ion has an excellent sense of Sight, Ion can see from about a half mile away without the need of an aid from glasses or contacts.

Ion can also hear things clearly, he can hear from about a quarter mile away from all sides. Ion can also hear footsteps very well. He will know if someone is nearby. If he can't sense any energy from nearby Mobian's, he will use his hearing by instinct.

Ion is a really fast learner, Ion has identified so much, so quickly, that he would give Eggman a run for his money. Ion can find a weakness so fast that it's almost impossible to beat him. He can also figure when someone or something has no weak point and will have to resort to fighting at his full strength.

Nuclear Energy and Other Skills

Ion's boost ability, much like how sonic uses his sonic boost. However the boost power is slightly weaker and not as fast. Ion still can hit foes with this, however it takes time.

One of Ion's many attacks, the name was originally his boost ability but was changed, Due to It fitting more with the word "Dash". Ion swipes his hand, causing anybody in that radius backwards, he does this with his own energy.

Ion has the ability to teleport to any location he can think of, though this does run on his energy so this move is recommended to stay in a set radius around the perimeter to preserve energy.

Ion emits a wave of heat all around him, Stunning his foes who are within range. Giving him the advantage in combat, unless his foe his a pyromancer, then it may or may not damage. Most Likely will not if this is the case. (It may remind you of one of the CoD:BO3 MP specialists but who then care about that shit XD)

Ion emits nuclear energy from one of his fists, then punches his foe in the gut. This move sends his foe quite far.

Ion dashes at his foe before Kicking them in the face and then blasting his foe(s) directly afterwards.

Ion's signature Skill, This is a variant of Chaos Spear. Except with nuclear energy.

A limited version of Chaos Control, Ion stops time for a few seconds, this gives him a small amount of time to strike back, however ion can only do this move a few times before harming his body and messing up time itself. This requires at least one chaos emerald.

Ion Sends a burst of Chaos Energy that acts like magic, Freezing anybody in place like they are frozen in time, however, this does not affect time itself, Ion then has control of the situation and can either attack or flee the fight. If ion attacks or is out of range, his foe becomes unfrozen and can attack at their own will, or won't even know where ion is at.

Ion has a few weaknesses that may hinder him is some cases. Ion has a limited energy supply. if this runs out he will be knocked out cold and will be vulnerable. Ion can be stabbed or shot by normal weapons. luckily he knows that and can avoid them, however, if thy are as fast as him or can stop time completely, he will be vulnerable and will have the most difficulty evading bullets or simple sword slashes.

Ion by: Nitrogen218
Add a photo to this gallery
Retrieved from "https://sonicfanon.fandom.com/wiki/Ion_the_Hedgehog_(2017)?oldid=1800669"
Community content is available under CC-BY-SA unless otherwise noted.