"You may be my enemy Coratin, but one thing you don't know is heroes always triumph against your evil. you may not realize what fate has in store for you, Defeat is that Fate!" 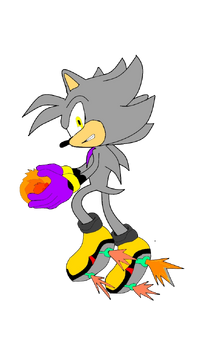 Atomic State (Overdrive half way maxed out)
Weaponry
None

Ion is a serious and Dedicated hero, always wanting to finish the job in a serious way... occasionally using sarcastic remarks or jokes (even bad jokes) about an enemy. he is also very alert and has very good with his suroundings

Ion in this stage was very awkward and was considered unorignial, due to having a keyblade... and is a hedgehog at the same time... not many people really liked this design or idea.. but it happened, his first design however is actually not a recolor, it was created in Furry Doll Maker and then that idea changed.

Ion has some changed design here, his shoes are different and, this time his design was actually drawn out by hand. this reboot introduces the biggest change for ion... he now uses atomic energy... but still uses Chaos energy along with it, but this does spark the creators intent of making him apart from mobius.. that was sparked when Gavin the Mongoose was created.. and hense coretopia was born.

The idea of Ion being seprate from Mobius was almost perfect, though it does have some flaws. Ion's design was changed by a user, but Ion has made many redesigns and changes untill the 2016 reboot

This is a Blade that was Formed when Ion asked if he could have a weapon similar to a Katana but Lets him channel his own energy to the sword itself. Paula (Who is the Weapons Blacksmith) Agrees and does a VERY SWELL job at it, This Katana has 2 modes: Standard Mode and Split Mode. Split Mode splits the katana into 2, Creating two Blades with a press of a button. he can also Channel his own Energy into his katana in BOTH modes making his swings able to Send Waves of atomic energy and much more.

Weapons in Main Canon (My Canon)

This character's fourstat code is 4729

Retrieved from "https://sonicfanon.fandom.com/wiki/Ion_the_Hedgehog_(2016_Reboot)?oldid=1676809"
Community content is available under CC-BY-SA unless otherwise noted.