Start a Wiki
This is an article about Inna Historia, a character created by Namusan on 11/1/2014. 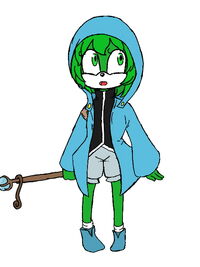 Inna is a young black-footed ferret with green fur and short, curly green hair. She has black stripes down her nose and cheeks, and spots all on her arms and legs. She wears a light blue long-sleeved jacket with a black t-shirt with a white trim underneath. She wears gray poofy shorts, and wears blue boots. She also has bright green eyes. She is short and skinny in appearance.

Inna is a very shy girl. She likes meeting new people, but she's very hasty with her conversations. People who talk to her a lot notice that she speaks very fast. Her tone in voice is often nervous and shaky. She is aloof as well, and sometimes can come off as cold and uncaring to those she shows visible dislike towards. She is very caring and clingy towards Shion and Anima, though, which many people sometimes find strange.

Inna Historia was born May 19, 473 ME (Magic Era) to Caelus and Nympha Historia. She grew up secluded in her home. When she was 3 years old, she discovered her magic ability: Water. Her parents, curious, excessively trained her to make her able to master water magic. However, Inna always screwed up and couldn't exactly fully master water magic. This disappointed her parents.

On the day she turned 7 years old, she was sent off to a magic school, the same one Anima and Shion were sent to. This is the school where she received Retentia, her staff. There, she was treated horribly and often walked home crying. When she finally told Anima that she was being bullied there, Anima swore she would beat up whoever she saw teasing her "cute little sister".

The two girls visited school the next day, and everyone seemed to avoid speaking directly to Inna now that Anima followed her around. Except for one person. That person pushed around Inna, and Inna showed no resistance. Anima, frustrated, stepped in and severely burned the person bullying Inna. As a result, Anima was suspended from school for 30 days. Inna was upset at this, and she told her parents about Anima's suspension. Her parents disallowed Anima influencing Inna for the time she was suspended. Sad and feeling alone, Inna started talking to her older brother. She was surprised at how cold he was to her.

At the age of 9, Inna still regularly visits the same magic school, but in a different building and class rank. When her siblings aren't around, she spends her time training and studying magic.

The Historia family's innate power is the power to sense people's auras. They can also tell the color of that aura, how the person is feeling without looking directly at them, and being able to understand their emotional state. They are mostly feared because of this power, as they can all use it to their advantage.

Inna has the ability to control water. This extends to creating whirlpools, small hurricanes, creating tidal waves, and summoning torrential rains. She can also increase and decrease the temperature of the water she creates, either allowing her to scald the enemy or pierce them with freezing rain. She can also purify or pollute the water in the area, depending on what she wants to use it for.

Inna, over time, has developed the ability to control ice. This is due to her ability to raise and lower the temperature of water. She can create small blizzards, make snow fall, and can also cause hail to fall. How she even acquired such an ability confuses her siblings.

Inna is small, fragile, and weak. Her personality and emotional state also leaves an opening for her to be easily attacked, either physically or emotionally. She is weak to Nature, Miasma, and Thunder-elemental magic. She also cannot make water if there is none in the area. Her water can be boiled or melted, though, which occasionally makes fights involving Fire magic users tough for her.

Retrieved from "https://sonicfanon.fandom.com/wiki/Inna_Historia?oldid=1553250"
Community content is available under CC-BY-SA unless otherwise noted.