This is for the unnamed leader of the Jackal Squad. You may be looking for his current identity.

It didn't seem they cared about you very much. They all went running without a second thought about you.

— Mocking Ash the Wolf about his Pack's fate, The Tale of a Wolf

The Unnamed Jackal Squad Leader, commonly referred to either as the Unnamed Leader or Unnamed Jackal Leader is a major antagonist in The Legend of Fox the Brave: The Phantom Storm. He is the person who became the cruel, merciless villain Infinite. 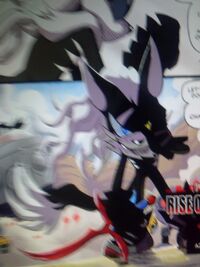 The unnamed leader is an anthropomorphic jackal with black fur, a white pattern resembling a ribcage on his back, a long bushy tail, a scar over his right eye, and two different colored eyes(the right is blue, the left is yellow). Just prior to becoming Infinite, he has a short scar on his right wrist, ripped ears, and a bite scar near the end of his tail.

Throughout his appearances, the leader is incredibly aggressive, mean, arrogant, and sadistic. As shown during his tenure with the Wandering Wolf Pack in Wandering Secrets, he is also very manipulative, tricking Ingram the Wolf into letting him stay up until he commandeers the Pack. When demanding ransom, he constantly mocks those he is making his demands known to, as well as taunting whoever he is keeping captive.

Before the Series: At an unknown point in time, the unnamed leader gained command or formed the Jackal Squad and began causing trouble to many innocent people.

VS. The Wolf Pack(part 1): When he first caused trouble for the Wandering Wolf Pack, then led by Ingram the Wolf, he infiltrated their ranks and spied on them until they began the journey to their Summer Camp, during which he had the Jackal Squad attack the Pack, and he killed Ingram. He then asserted control over the Pack, but a furious Samson fought back, yanking his sword away and wounding him in the face with it(which would later become the scar on his face). This forced the Squad to retreat.

VS. The Wolf Pack(part 2): During the events of The Tale of a Wolf, the Jackal Squad tailed the Wandering Wolf Pack, and Samson, the new leader after Ingram's death, decides to fight them off. He wins, but the Squad attacks anyway, kidnapping Samson's elder son Ash and holding him for ransom. When the Wolves try to raid them and save Ash, they are forced to leave, as the Squad leader threatens Ash's life. The Jackal Squad then move away to hide better from the Wolves. When the Squad attempts to raid Eggman's base in the desert, their leader decides to join Eggman, and Ash is kept in a cell in the base. Later, when the Pack fail to pay the demanded ransom, the leader loses his patience and the Squad attacks the Pack and tries to destroy them, thought they fail. When he returns, the leader taunts Ash about his Pack's fate while his Squad members throw another young Wolf pup, named Vernon, into a different cell. The two later escape, and make it away with the Jackal Squad hot on their tails.

Capturing Wilson: In A Dark Secret(his debut as the unnamed leader), the Jackal Squad is used to force Wilson the Wolf, an IT guy, into helping Eggman, with the leader threatening Wilson's younger son Rex. When Wilson gives in, the leader frees Rex, and later continuously taunts and bullies Wilson whenever he is around.

Ransom Kidnappings: Over the next moons after Wilson and Ash's kidnappings, the leader continues to cause trouble for the Worlds along with his Squad, including kidnapping children from various cities and villages for ransom. He even catches Austin Smith and Storm the Buizel, bringing them in as Ash and Vernon are escaping. The Squad's last kidnapping is that of Digger the Dog, his sister Pixie, and their friend Markus the Hedgehog.

Becoming Infinite: When Shadow the Hedgehog (Archie) raided the Mystic Jungle lab to save Wilson, the Jackal Squad is annihilated in his attack, and the leader is given a beating by the black hedgehog, prompting him to find a way to become stronger and cast off his old identity.

Prior to becoming Infinite, the unnamed leader had incredible skills with his sword, making it hard for his opponents to dodge, unless they were invulnerable, like Fire Fox.

Despite being skilled with his sword, he doesn't appear to be very strong without it, as he was unable to defeat Shadow the Hedgehog(though this may be because of his teleporting around). He also appears to find it hard to fight someone who can block his sword or dodge it, as Samson does.

In Wandering Secrets, the unnamed leader expressed a strange desire to command the Wandering Wolf Pack for himself, and thus infiltrated their ranks, tricking the then leader Ingram into trusting him despite his deputy Samson's suspicions. When he betrayed the Pack, the leader killed Ingram.

When the leader killed Ingram, he drew the ire of the Wolf's sons Aster and Benji, who began howling for vengeance for their father's murder.

In The Tale of a Wolf, the leader had Ash kidnapped and held for ransom, though his family and Pack could not pay. He continuously taunted Ash, making him lose all hope of returning to his Pack. When Ash and Vernon escaped, the Jackal Squad hunted them down, though the two escaped.

Vernon was kidnapped for ransom from Wolfhart City, but escaped with Ash. The two were then hunted down without mercy, but managed to get away.

In The Warrior's Quest, the Jackal Squad tormented a family of innocent jackals living in Downunda, attempting to coerce/bully the patriarch Turner into joining his Squad, and trying to destroy them when he refused. Only grandparents Humphrey and Avery were killed, though each member was badly scarred in their own way; Turner is blind, Tobi lost most of his voice, Kate has scarred shoulders and flanks, and Alex was nearly killed on a Storm Fighter mission.

The leader constantly tormented Wilson during his enforced servitude under Eggman, and threatened him if he tried to leave. It's possible that he enjoyed the power he had over the Wolf.

Though they only met twice, the leader still antagonized Hooper. In their first meeting, he took an interest in the Dusk Lycanroc, because he was aggressive and strong, able to take on the entire Jackal Squad(sans their leader, who watched) until they managed to pin him down, after which Hooper remained aggressive.

"Your silence is admirable, my fox friend, but it will not save you. I can easily dispose of you and find someone more...cooperative."
—Threatening Roy the Fox, The Struggle for Peace

"You're strong. I like that. I could use you."
—After Hooper is beaten, Unknown Story

Alex is the first person to recognize Infinite as the leader of the Jackal Squad, as he recognizes the scar his father left when he bit the leader.

Fox is the only person to ever unmask Infinite and reveal his true identity, which greatly infuriated him(as the biggest troublemaking rogue and the biggest threat to the Worlds were one and the same)

It can be assumed that Silver was able to sense Infinite prior to him gaining the Phantom Ruby, seeing as the Ruby blocked Silver's aura-sensing powers and Arrow's telepathy, but this is never mentioned.

Retrieved from "https://sonicfanon.fandom.com/wiki/Infinite_(Burpy%27s_Dream)/Unnamed_Jackal_Leader?oldid=1843555"
Community content is available under CC-BY-SA unless otherwise noted.