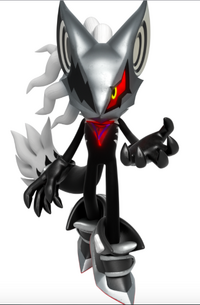 Infinite is the main antagonist in PR: Infinity Road. He is from the Timeline 2 like Broly's Timeline 2 counterpart.

Infinite is an anthropomorphic jackal with a black body, long, stiff, and white quills, and a bushy tail with a white tip. He wears black gloves with silver streaks on the back and sharp fingers. He also wears pointed metal black, white and silver hi-tops with his personal infinity symbol engraved on red-lined soles.

Infinite has a red colored tetrahedron-shaped gem with a purple line running through it on his chest. This gem bears some similarities to the Phantom Ruby. His most noticeable feature however, is a silver metal mask with large ears with white and black circular patterns on the inside, with the right ear being black with white circular patterns and the left being white with black circular patterns and a black lightning bolt-shaped piece of metal over his right eye that is connected to his right ear, that glows when he uses his power. However, his left eye is visible, revealing a red sclera with a yellow iris and black pupil. This mask also appears to be loose-fitting.

When Infinite tries to stop both Samuels (Zuzu-Samuel and his past self)'s fina attacks, they manages to destroy the Timespace Gem by using Zuzu-Samuel's Dragon Superior Fist. Before he was sent back to Timeline 2, he mocks Zuzu-Samuel that the stronger foe is coming at him to destroy him.

Retrieved from "https://sonicfanon.fandom.com/wiki/Infinite/Zekons?oldid=1829648"
Community content is available under CC-BY-SA unless otherwise noted.