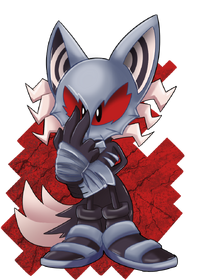 Infinite is a mysterious jackal who threatens Mobius in an alternate universe during the Sonic Forces arc. He holds a grudge against most of the kids.

Infinite is a control freak. He's a snobbish jerk who will flip out if one single detail of his plan doesn't go as it should, and he throws tantrums if he doesn't get what he wants, like Silver, but more destructive. His destructive capabilities are increased if he's angry or even slightly annoyed. He's extremely conceited (on the same level as, if not even more than, Shadow) to the point he freaks out if he gets dirty or gets a minor injury. If he believes there's a stronger being somewhere, he will become massively envious of and hold a grudge against them. He's also sadistic as he enjoys the suffering of thousands; and shows no respect for anyone other than himself, even treating his teammates as "low-class subordinates." During his time in the Jackal Squad, he was militaristic and called himself the "Ultimate Mercenary." He carried over his military discipline over to his role as conquerer. His power and others' doubt turn him on.

When Sonic discovered the Phantom Ruby, he accidentally unleashed an unspeakable evil upon the world which gave an arrogant jackal named Infinite unlimited power. Infinite originally led the Jackal Squad until this point. Infinite eventually found the Phantom Ruby himself, and it told him to submit to the power of his deepest desire somewhere within him. This being a world in ruins. As he felt himself growing more and more powerful, he tried to escape, but he accidentally struck the Ruby with his sword. This made him succumb to his desires and become a masked, unstoppable threat bent on punishing the world. Gathering up some of Sonic's enemies, he opened another universe where he wrecked havoc. Sonic and friends went in after him and he was ultimately defeated.

His childhood is unknown. However, what is known about it is that he was in a club called the "D Club" with Zinnia and Rocksanne the Jackal and several future Jackal Squad Members. (He only had to explain because Tails asked him if the D Club was real.)

Infinite possesses time-splitting powers thanks to the Phantom Ruby. He's also able to "glitch" things at will and make people see things thanks to simulations and nerve gas (like the one Shadow has.)

Infinite's weakness is taking damage or getting dirty, as he values himself very much. He also hates being insulted, especially if he's called weak. The reactor he was sucked into at the end of the arc was enough to weaken him for a while, but he managed to escape it.

Retrieved from "https://sonicfanon.fandom.com/wiki/Infinite/Mobius_Redrawn?oldid=1806206"
Community content is available under CC-BY-SA unless otherwise noted.