Inanna (イナンナ, Inanna) is the capital city of New Babylonia and has the largest population that first appeared in True Divine Generation: Need for Speed... game in Sonic Monster World series.

"Inanna is known for having an exotic tradition and having a powerful magical form, Inannian. This beautiful jewel is the heart of New Babylonia, having its nickname "The City of the Future""
—Description, True Divine Generation: Need for Speed...

Through millennia, the city once had queens as leaders during the first Genesis but have eliminated to the city.

The main language of the city was actually called Innian. Despite without using its language instead Inannians use English

Inanna celebrates ceremonies that honored some important events such as year, veteran ranks, newborn, or the Sorarian Moons. The year ceremonies are common for the city and its people to see the twilight's "birth" furthurmore the old time goes to the afterlife. The Statue of Inanna glows in the middle by the moon's lightray having the purpose to cause a powerful laser-like beacon straight in the night sky directly to the eight-pointed star.

The Sorarian Ceremony is rare to Inanna.

Nanaya () is Inanna's suburban city as was founded by a leader of Babylon Rogue, after the battle.

The Garden of Nanaya (), named as Alephia or Oyora, is a huge mystical grottolike area that was found by the unknown Iadian priestess

In True Divine Generation: Need For Speed IV, Sonic destroyed the Garden when he encounters Jet and Serha, after his engagement refused by Serha, trying to stop him from eliminating the whole humanity and millions of civilised beings across the entire world possessed by the vengeful god Exnir.

The badland near the underground of Inanna. 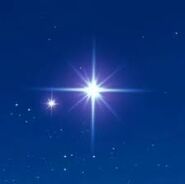 The eight-pointed star during the taking of the summer solstice's nights (Neverland Star from Peter Pan).

Peak of Inanna's empire with the two Sorarian moons.
Add a photo to this gallery
Retrieved from "https://sonicfanon.fandom.com/wiki/Inanna?oldid=1871776"
Community content is available under CC-BY-SA unless otherwise noted.