Icey is the Fursona of User:Mewkat14

Icey is a white and peach anthropomorphic rabbit. Her name relates to her power of ice. Her powers have no trace in genetics. Icey also has an Ice-Type Chao named Frosten. She can use her Chao as an Ice-weapon.

Icey the rabbit was born in Aurora icefield,Mobius. She was born during a dark time, the Zone had been under a terrible and raging storm. Durings time Icey's parents had been killed due to the storm. Icey was left alone for years until she had been saved by her three friends, Coco,Bolt, and Taisk.

Icey is very stuborn but loyal. She teases everyone,even her friends,sometimes by socking them in the arm or even pushing them to the ground using her strength. She never minds her manners at all. She is kind of a brute sometimes. But she has a very kind heart inside. Originally she had a crush on Tails but hid it inside and showed her feelings by hurting him very badly,even kicking him off balance while he'd fly. This plan was scrapped.

Icey,of course, has the powers of Ice and other Hydro-kinetics. She can make Snowballs instantly and manipulate water. She can also freeze things. Her Chao,Frosten, can be used as a weapon. She can take Frosten and throw him, while Frosten is in midair, he will turn into a ball of ice. Her powers can be used to stop fire or manipulate weather.

A full page of Icey drawings 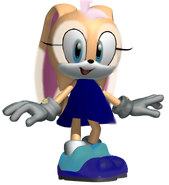 Icey the Rabbit by Daisysonicfan2000

Add a photo to this gallery
Retrieved from "https://sonicfanon.fandom.com/wiki/Icey_the_Alaskan_Rabbit?oldid=1780475"
Community content is available under CC-BY-SA unless otherwise noted.