Icee the Hedgehog is a fan character created by SuperIcee (also known as TrueIcee). Icee is a national hero/prince from the country of Zerometropolis. Icee was created as a fan character in 2004, but then remade in 2007 for a split look and a new personality. A brand new redesign was released on Febuary 26, 2014, Icee's 10th Anniversery as a character. 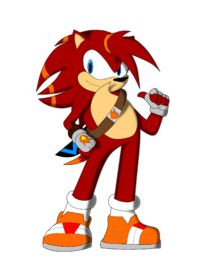 Icee is a tall hedgehog with red fur as well as orange stripes (including his tail being orange half way down), standing at 4'2". He has sky blue eyes and a tan musule and stomach. The fur on his stomach has a tip. His spines are tilted, the top two fall downward and the bottom two tilt upward. He has four bangs that are held by an orange head band. His shoes are orange with white and red stripes, as well as sky blue streaks. He wears gloves with the fingers uncovered, the Ancient Guantlet (a brown wristband that can glow) on his right wrist and a wrist communicator on his left wrist. He wears the Dual Splitter EX on his back with a brown strap.

Icee himself is a person who is nice and always willing to listen. He is really caring and will always try to help his townspeople and friends with his best effort. Icee is really stubborn at times and doesn't like to ever give up. He also can have a bit of a temper whenever his friends are in danger.

Icee has two special powers: the abilities to control both fire and electricity. These abilities are hereditary for him, as his family has a history of having different abilites, mostly from the males of his family (mainly from his father and grandfather). He has grown into using them, having used them since he was 8 years old. As well as using his powers seperatly, he can also conmbine them.

Icee was born at East Zerometro City Local Hostpital into the royal family by King Ragent and Queen Elisa. He is the oldest of 4 siblings (2 boys, 2 girls). The only thing known about Icee's early childhood is that at age 1, he was told he would be king when he turned 21.

Whenever a royal family family member turns 5, they are required to go to school. Icee went to school early on his first day, unaware of the city being attacked. Though his nemesis, Xlar Wallace, pointed Icee out as his main target. So he attacked Icee that day. Icee won that fight but was injured.

King Ragent and Queen Elisa found out on the news that day Icee fought Xlar. Icee's father was proud saying he is a natural born fighter. But his mother was dissapointed in him, as she is a very caring person. One night when Icee was 12, his father made a meeting. During this meeting, King Ragent said that Icee should take sword lessons. Both Icee and Queen Elisa looked at each other with a questioning face. Queen Elisa was at dissaproval, for about 4 hours, then changed her mind and said as long as it's ok with Icee. Icee did say yes, and the very next day set out on a 30-hour adventure to the top of Breakpoint Mountain. When he arrived, he than brought a gift to see if he would be able to train with, Master Shadow Dual-Blade. Icee went through challanges and barely came out on top. Master Shadow Dual-Blade said he saw a fighter in Icee and did train with him. Over the course of 4 years, the two trained together, and they also became good friends. On Icee's last day of training, the day before his 17th birthday, Master Shadow Dual-Blade awarded Icee the sword he uses in battle, the "Dual Splitter". Which is a Sword that can turn into Dual Swords. Icee and his Master said their good-byes, and his Master's last words to him were, "Continue on your path, and we may meet again..."Master" Icee." Icee then returned home. Now ready for the events that were before hand.

While Icee was away mastering sword play, Xlar and Cathrine were planning an all-out war which was named the "Dog War". They attcked the entire city of Zerometro City. Scaring tens of thousands of Zerometros. They were mainly after dogs though. As dogs are not only a link to the royal family, but lead the Zerometro Army as well. The war was over before Icee returned as the Battle of Breakpoint Mountain involved him as a distraction to stall him. When Icee did return, the war ended in a draw, all but 2 dogs were killed, Zoom the Dog and his older sister Nicki Pooch. Icee was majorly upset. "I let down my country." He said. "I'm not ready to be king." This would stay on his mind for the next week.

One week after the meeting, Icee had called a country-wide meeting. Declaring that the country needed a serect service that was not known about to help in wars and he would lead. This is what started the Zerometro Freedom Fighters. Since its start, it gained over 40 members, and fought in over 250 minor battles, 100 major battles, 3 all-out brawls and 2 wars. Icee says if Xlar continues to improve on his evil or if the get another teammate, they may be in for it.

Icee was caught in a lot in recent events. No wars or anything major. But Icee has had to deal with a new rival, Mei  Panda. He has gained 3 new accessories: The Ancient Gauntlet, which unlocks Icee's dark energy. Abilities bracelets, which allow Icee to copy abilities for a short period of time, as well as enhance his own. And the Dual Spitter EX, an upgrade to the original Dual Splitter sword, done by Dr. Carolina Jones, in return for Icee saving her family. Recent problems deal with dealing with a female clone of himself, having to fight every Freedom Fighter in Zerometropolis, and "Dark Empress Mei". He recently went on an adventure into another dimension,  which was caused by a breach in Xlar and Cathrine's newest invention, which went haywire and actually due to a lost battle against Dark, was thrown into the portal. A wierd prediction was also made that in 2 years time, he'd have to fight his sister, Merna, since she would destroy a devine peace that would have lasted an entire year.

Retrieved from "https://sonicfanon.fandom.com/wiki/Icee_the_Hedgehog?oldid=1603210"
Community content is available under CC-BY-SA unless otherwise noted.