Start a Wiki
This is an article about Ice Crystal the Fox, a character created by GalaxyWorld27 on 3/07/2014.

Ice Crystal the Fox is a fan character created by GalaxyWorld27 (Known as sonicgalaxy27 on YouTube). Since making new friends in her life, her desire is to keep the peace in the world and keep Celestial Kingdom safe from danger and harm by any means necessary. 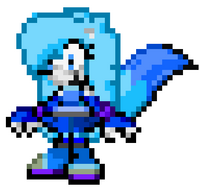 Anyone who is threatens her friends

People manipulating her into doing bad things for them

When some people not keeping there promises

The world in danger

Being taken advantage of

Anyone who tries to take over her kingdom for evil

Unable to used her ice powers
Friends
Madoka the Light

Ice Crystal is a female Fox who has light blue fur and light blue turquoise eyes and has a blue tail on her back. She has grey skin and also has a black tattoo on the side of her face. She also wears a blue shirt with a black belt around her waist and has a blue skirt with it. However, She also wears fingerless gloves with a purple ring in both of her wrist attach to her off shoulder sleeves. She also wears a dark blue and gray boots with blue straps on it and wears black leggings witch is almost close up to her thighs.

Ice Crystal personality states that she is a kindhearted, lovable, caring and a loyal helpful person with a good behavior around her friends. Sometimes she has a temper when one of her friends doesn't listen to her plans carefully or doesn't understand what she is talking about in some situations she is in.

Ice Crystal has a distinct love for ice cream, pancakes, and Pop music. She sometimes doesn't get stuck on some events much often. She always checks on her kingdom sometimes just in case anything bad happen to the castle and her land and she has her guards watching the place even her parents while she is away from her home to be with her friends. Ice Crystal is always looking forward to the future and see what her future holds for her and her family witch she will always be ready for events and what she can counter for herself.

Ice Crystal was 5 years old when her parents ruled the Celestial Kingdom during the time at a very young age. Her parents are both kings and queens in the kingdom when they were very young. However, they discover that the kingdom needs a female princess to take the throne in the castle as a new ruler in Celestial kingdom. Both her parents believe that Ice Crystal might not be capable to take the throne as the new princess of the kingdom because one of the guards thinks that she is too young to be a princess and doesn't have any ice and snow abilities like her family does.

At the age of 12, she is able to gain ice powers after she was bitten by a radioactive wolf in her right arm witch the wolf was used as a experiment in some lab and she was injured badly. After she recover from her wound she learn how to used her ice powers well and wisely by controlling them. However, she learn how to used them from her master and train her to used those moves well. Ice Crystal always enjoys the snow in her homeland, but she hates the fact that she doesn't like to be stuck in the castle all day. All she wants to do is to have fun and make some friends in the outside of her homeland but her mother believes that its not safe for her to go to the outside world because its too dangerous for her and she is being overprotective on her daughter because of witches, polar bears and monsters. Her mother Elisa forbid her for going to the outside world and will not allow her to go anywhere in that world, because she wants to keep Ice Crystal safe from any harm.

When she reach the age of 20, she believe that she will do anything to protect the kingdom and her family from harm. But she went to the outside world known as another world when she make some new friends and visit them anytime without her mother, her father and her brother knowing. At age 21, she also thinks about stepping down for being the princess of celestial kingdom and quit being the ruler and give the throne to somebody else who is worthy of being the next ruler of the kingdom and her successor. The reason for this is because of Ice Crystal doesn't like to do this kind of stuff all the stuff and started to get bored of it.

While her powers is in her DNA after being bitten by a radioactive wolf in her right arm, she a couple of ice powers that she can used and learn.

Ice beam: She can shoot her ice powers with her hands and freeze her opponents inside the ice.

Ice Blizzard: She can shoot ice in her mouth by freezing her opponents and anything slowly.

Blizzard Climax V2: This move is a bit strong but it can blow her opponents far away with that move or attack them with it.

Ice Punch: Even so she likes to fight close combat with her hands and feet, She can used Ice punch as a attack move. However, it doesn't freeze her opponents when she hits them with it.

If she uses Blizzard Climax V2 and use too much of its power, She will pass out completely and won't able to used her powers again for 84 hours meaning that her powers will not activate in her body until those hours are up and she will sometimes think that she lost her powers.

Start a Discussion Discussions about Ice Crystal The Fox