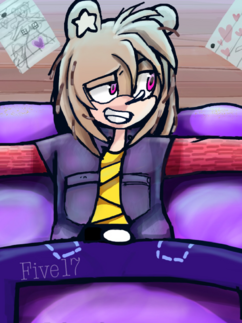 Nalia the hedgehog Mari the Chipmunk

"And so your point is? Sure, there are things about them that I don't agree with sometimes. But I accept them, Their good and bad parts. "
—Ian the Porcupine (when protecting his friends from getting ridiculed by others )

Five17, the author of Ian the Porcupine, considers this page to be unfinished. As such, some sections may change.

Ian the Porcupine is an 18 year old Male, who has the power to manipulate the weather. Ian is one of the main characters in User:Five17 story. He attends Station Square high along with his friends as a Senior, where he actively participates in sports.

He is a regular brown colored porcupine, who has long spines that reach to his mid back. He also has dark magenta eyes. His main attire consists of a dark, blueish-purple vest, A long sleeved yellow shirt, but the sleeves are a sort salmon or dark pink color. Around his waist he wears a black belt, and wears dark purple jeans/w the outline of the pockets on the pants are a pale blue color. His shoes are one of the few things he changes from time to time, but the main shoes he wears are light or dark tan colored boots.

While he attends school, his standard uniform consists of mostly a black collar shirt/w a red tie, along with black khaki pants/w a either dark black or red belt worn around the waist, and black causal shoes.

Ian is a laidback guy, but can get really energetic when turnt up. He's very sociable, having little to no issue with interacting with anyone as he's pretty bold and likes to have conversations. He doesn't limit himself to talking to a specific group of people or people in his social circle, he likes to talk to, well just about anyone. Due to his charismatic and relatively sociable nature, he's made a lot of friends with people and has even become friends with a few who are in completely different social circles then he is, he's even dated girls that others would've have considered "not pretty" "not popular" or "very bizarre". He's also pretty easy to talk to and is really approachable, because of this he's extremely popular in his school, although his teachers tend to not like him too much because he often fails to turn in assignments and his mind is often clouded with other things than work. In his circle of friends Ian is the most outgoing.

He can also be a bit of a klutz, usually as a result he often winds up breaking things. Because of this alone, he's hardly ever allowed to come over anyone's houses.

Ian was born in Mobius, to a very wealthy family, He's second youngest of 4 siblings. However, him and his family moved to the small island of Apotos when Ian was only three. His father, Blanc, is a successful businessman, who owns a company that makes computers/laptops and often travels overseas, While his mother, Aida, was a famous fashion designer, at some point she decided to do her work at home so she can spend time with her kids. However, despite how immensely rich they were, his parents never spoiled him or his brothers, and always made sure they were either doing chores, such as cleaning, laundry etc. and always did their homework. His parents wanted him and his brothers to live normally like other kids their age, as such they were all enrolled into public school. Ian loved school and was excited to make friends. To say the least, it wasn't difficult from him to make friends given his sociable nature. After school him and his bros would hang out together, either taking walks, swimming, and eating ice cream on hot days or just having fun around the town with friends. For the most part, ian's life was pretty good.

However, by the time Ian was only 11 years old him and his family moved off the small island of Windmill Isle to the city of Station Square, due to his father's work. Ian became very saddened upon leaving as he missed his friends from the island. For awhile, Ian found it hard to adjust to his new environment. But, eventually he managed to adapt to city life, and going to a new school, since then he's loved living there, but does wish every now and then to go back.

Enhanced Agility - This ability is proved to be extremely helpful/beneficial for Ian. He is able to move from motion to another effortlessly. It ranges from doing back flips and doing other numerous of gymnastic abilities. This ability allows him to change his body positions, nearly making him flexible as well. Usually this ability requires a combination of strength, endurance, balance, reflexes, body coordination and speed.

Sports- As much as he likes sports he's not that fond of them(how ironic?), compared to his love of soccer. He played a lot of soccer as a child when he still lived on the island of apotos.  He's tried out for basketball, at first he considered it OK until eventually dropping it, out of disinterest. Other sports he's tried out was football, baseball, swim team and even golf( which he found to be incredibly frustrating).

Cooking- Ian is actually really good at cooking. This comes as a shock to those around him. He learned how to cook when he was only a small child, since he used to have a habit of watching his mother cook, eventually it lead to helping out his mother in the kitchen. However, He rarely has the patience to cook as such he doesn't cook very often.

Video gamer- He's not the greatest player, but he's pretty decent where his skills would be almost on par with Nalia (however, Nalia usually ends up beating him).

He has a fear of sharp objects; especially needles, known as Aichmophobia. He has always hated sharp objects, he avoids them like a plague. He is prone to have freak outs, causing him to faint, scream or run away from said objects. However, he's ok with using plastic versions of sharp things(ex: plastic knife).

Ian at times can be really emotional and feels embarrassed about it, so he would just cry to himself somewhere when no ones around or bottle them up. This leads to carry on very negative emotions but puts up a facade to hide how he feels. However as his emotions continue to build up on each other it'll lead to a point where he could no longer contain/control them, he just explodes. Which is not a very good thing.

He's bit close-minded when it comes to different sexualities/gender identities(or something he's not used to).

Sena is Ian's childhood and Closest Friend. Although, their personalities are very different from each other, Like Ian being talkative and fun, While sena is Brooding and sarcastic. While their personalities tend to clash from time to time, Their still very close. Sena is one of the few people that Ian would have the courage to talk to about his personal problems, which sena always trusts to keep to himself, not telling anyone else about what they talked about, showing the trust the two have between each other. His dad and sena's dad were both really good friends, as such Ian would often see sena and his siblings come over when they were young. Ian wouldn't hesitate to ask the wolf to play with him, which always led to a harsh rejection. Initially, Sena didn't like Ian very much, finding him incredibly annoying and immature, but that didn't deter Ian from trying to be friends with him. Although, their relationship started off rather slow, it eventually blossomed causing both to become as close as they are today. Ian doesn't do this too often, however when he does, he teases and flirt a little with sena, which sena often ignores or dismisses.

Him and Ni are OK friends. She'll sometimes accompany naila with the group on some of their hangouts. While the two are inside school, they get along well, often cracking jokes with one and another, even hanging out at lunch together sometimes. However, They don't hang out or talk much to each other outside of school. They've dated once, but broke up.

Close Friend. He first met Nalia upon her arrival to Station Square. When he noticed how uncomfortable she was with her new surroundings, he offered to show her around and if she wanted: he could be her first friend. Afterwards the two became friends. Ian respects and admires her for her honesty, how she speaks her mind on things, as such he developed a bit of a crush on her. He flirted with her a lot and felt no shame in doing so. Although, she entertains the flirting and flirts back to be playful, sometimes, she gets annoyed by his excessive flirting and tells him on a couple of occasions to stop. At one point, he asked her out, to which She rejected him, since she didn't feel the same for him(he didn't take it personally). Other than this the two get along really well, They are always seen hanging out after school, always dragging sena along with them. Along with sena, nalia often tries to keep Ian out of trouble.

She is a very good friend of Ian. Mari and Ian are often the ones to come with weird or crazy adventures to go on, mari comes up with the idea while ian takes action. Ian met mari during his freshman year in high school, the two instantly hit it off and became fast friends due to their equable sociable nature. Sometimes, mari likes to drag out ian on her shopping trips if she couldn't get her boyfriend to come and get Ian to help her out with picking out clothes. Mari at times tends to get caught up in ian's shenanigans.

He is Ian's rival. However, their both on good terms.

Their relationship is filled with nothing more than passionate hatred for each other. Adin is one of the very few people that gets under his skin. When someone bring ups adin's name in a conversation he will become angry or become silent. Whenever they bump into each other on the street their always fighting in their attempts of hoping to harm to each other. Ian has a strong hatred towards assassins, as such, since adin is an assassin himself, his hatred for him worsens even more. It seems that they had a past history with each other.

She's one of Ian's human friends. He's very kind to plenty and almost sees her as a little sister. However he does tend to get put off by her air headedness and eccentric personailty, sometimes he gets into unfornate situations when with her, but he knows she doesn't do this intentionally and usually forgives her after the fact. Plenty deeply adores Ian and admires how short he is and sometimes tries to pick him up(which she does alot). She also likes to make art for ian every now and then(He occasionally commsissions her).

Retrieved from "https://sonicfanon.fandom.com/wiki/Ian_the_Porcupine?oldid=1849924"
Community content is available under CC-BY-SA unless otherwise noted.