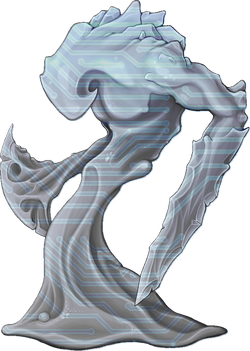 "You are a error that must be exterminated."
Basic Info
Name
INVERSE
Full Name
P-0W3R "INVERSE"
Nicknames
Monster of the Week

Image created by Canada-Guy-Eh. Credit goes to him for the usage of the image.

INVERSE is a fictional character and the main antagonist of SONIC THE HEDGEHOG: Cybernetic Revolt.

INVERSE is a formless entity composed of nanites. Due to it's everchanging appearance. It has no definitive look. Though it prefers to have a more humanoid shape.

INVERSE has a very charismatic personality and wishes to "evolve" the people of Mobius and turn into a utopia where only the perfect thrive. It considers anything other than it's "evolved" citizens to be inefficient simple creatures that must have evolution in order to survive or die for rejecting it. It has absolute pride in it's abilties and considers itself to be a unstoppable entity. As a result, INVERSE has a Messiah Complex.

After the world was taken back from his influence, Doctor Eggman went into hiding in one of his abandoned bases and began working on his next plan for world domination only to realize that there was a very interesting area that is heavily populated he had yet to use. New Metropolis. Eggman went in secret and began collecting nanites from NICOLE in order to create a robot compromised of them. Fearing a repeat of the incident with ADAM months back, The doctor added a tumor in his new creation's intelligence. He called it: "INVERSE" and it was used to be cover the entire world in it's nanites. A mobile more efficient version of Robotization. However INVERSE's ever-adapting intelligence soon created programs in it's AI to overwrite the tumor and succeeded. After doing so, INVERSE took over Robotropolis and turned it to his own personal stronghold. He saw the world around him as a inefficient primitive wasteland that needed evolution to survive. He began using it's nanites and using them in order to cover Mobians in cybernetics designed to bend them in his will as they are now "evolved". INVERSE called them "Metallions" and referred to himself as a "Metallion" as well. With it's army hidden in the abandoned city and numbers slowly growing, The Metallions striked and attacked Eastside Island and the rest is history.

INVERSE's powers come from it's nanite body, The nanites allow it to change shape and use it's own "limbs" as weapons. Through body manipulation it could become a snake,bird,fish,shark,monkey, or any variety of animal or object it wishes to be. It could manipulate it's own "limbs" to make them into weaponry such as guns,blades,saws, and much more. INVERSE also has several spare nanite bodies for it's core AI to control if one were to be destroyed.

This character's fourstat code is 7567

As said eariler, INVERSE's adapting intelligence is unfortunately not perfect and is still prone to making mistakes and bad judgement calls in the heat of battle. INVERSE's Messiah Complex is a big part of the reason why this happens. It's absolute confidence in it's abilties can cause it to overlook major flaws or underestimate it's foes.

Retrieved from "https://sonicfanon.fandom.com/wiki/INVERSE/Old?oldid=1826269"
Community content is available under CC-BY-SA unless otherwise noted.